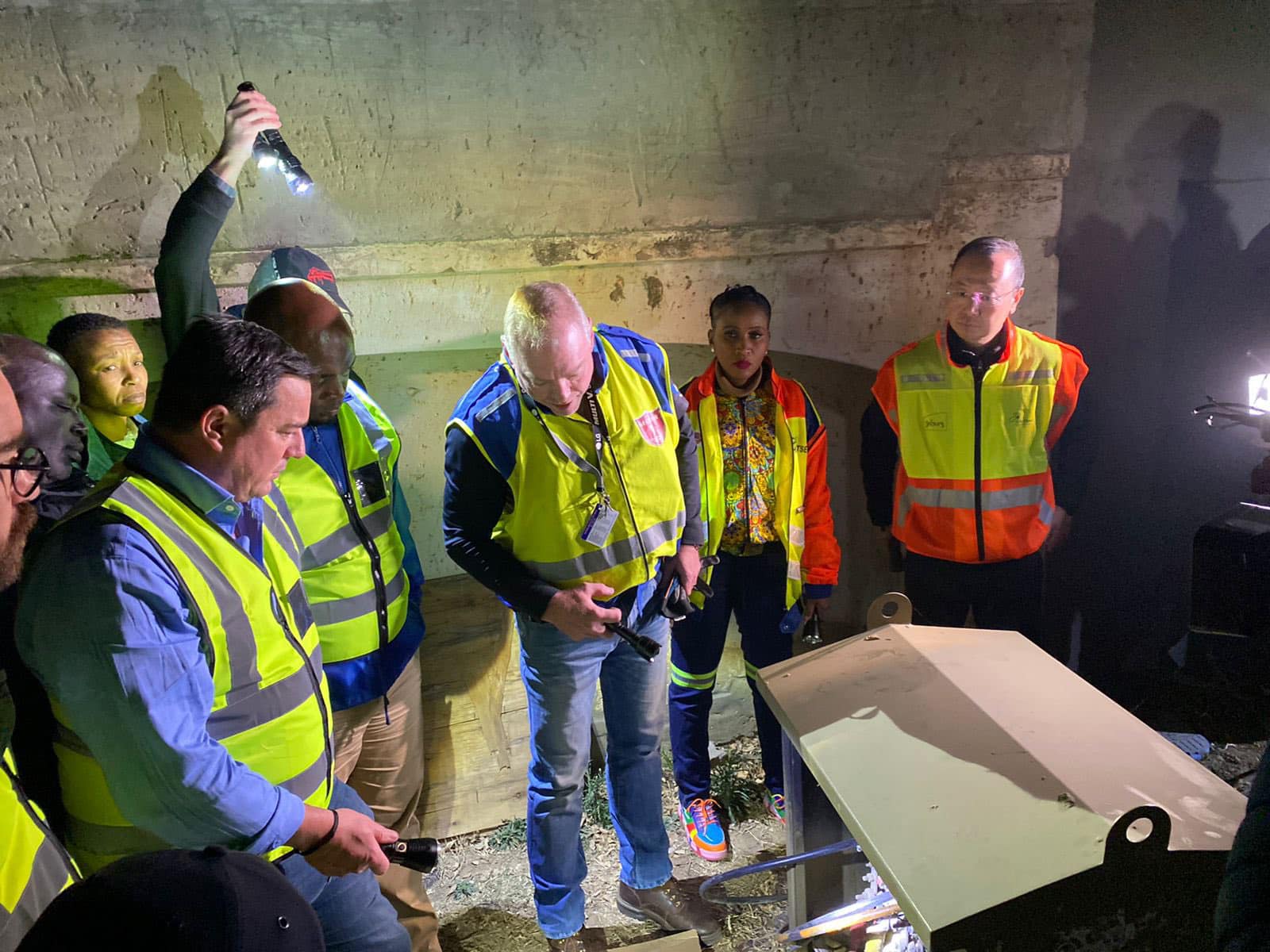 Today I will join the Mayor of Johannesburg, Mpho Phalatse, the Johannesburg MMC for Environment and Infrastructure Services (EISD), Michael Sun, DA Gauteng Leader, Solly Msimanga, and DA Shadow Deputy Minister of Trade and Industry, Mat Cuthbert, on a Community Infrastructure Protection Patrol in the Kaya Sands, Bloubosrand and Northriding areas of Johannesburg.

This is the fifth such patrol the DA-led local government, together with the local Community Policing Forum (CPF), has undertaken in Johannesburg. Previous patrols have covered Eldorado Park, Ennerdale, Doornkop, Dobsonville, Florida, Stormill, Glenvista and Mondeor.

The theft and vandalism of public infrastructure – in particular copper cable and rail stock, but also telecommunications infrastructure and electricity substation equipment – has had a devastating effect on our economy and the businesses who rely on this infrastructure to operate. Equally, ordinary South Africans have had to bear the brunt of these crimes through collapsed service delivery and public transport. And it is a scourge that is rapidly accelerating.

According to councillor Sun, almost 1500 cases of vandalism and cable theft have been reported to City Power in the past year, costing the city R24m in damages and repairs. City Power has lost more than R187m to copper cable theft and damage to electrical infrastructure in the past five years and now spends R100m a year on security measures.

Transnet claims that the theft of copper cable has increased by 177% over the past five years. Last year Telkom, Eskom, Prasa and Transnet said in a statement that cable theft and infrastructure vandalism results in a direct loss of R7bn, but a staggering R187bn knock-on effect on the economy each year.

Our country and our economy cannot survive this relentless looting of critical infrastructure, and this is why the DA has taken action by setting up a task team and requesting a debate in the National Assembly on the matter. The Speaker of the National Assembly has agreed to our request and has granted this for the first week of Parliament’s return.

But our actions are not limited to the legislature. Today’s Community Infrastructure Protection Patrol, and those before it, are a demonstration of what we call the whole-of-society approach in combatting the challenges facing our country. The patrols include, among others, the Metro Police, local Community Watch, councillors and the CPF. It is this close cooperation between government, civil society and committed citizens that holds the key to overcoming this challenge.

But first the issue must be correctly identified. The solution to stemming the tide lies in law enforcement and crime prevention and not, as Ministers Pravin Gordhan and Fikile Mbalula claim, in banning the export of scrap metal. All that would do is play into the hands of those with vested interests in the upstream steel industry, as well as well as further encourage a massive local illicit market. This is an issue of criminality, and it requires an appropriate response.

In addition to involving the community in patrols such as these, there are a number of interventions available to local governments. These include setting up specialised units within metro and town law-enforcement authorities, placing indelible markings on all electrical infrastructure, securing infrastructure with antitheft bolts and fasteners, utilising alternative metals to replace copper, sharing information with local law enforcement and metal recyclers, and allocating the necessary budget for security patrols at sites such as substations.

Where the DA governs, we already prioritise the protection of infrastructure. In 2017, an Anti-Cable Theft Unit was established within the Tshwane Metro Police Department (TMPD) to provide static guarding at open tranches and substations, conduct patrols of hotspots, inspect scrapyards, and respond to cable theft complaints. In 2018 the City of Tshwane also purchased 103 off-road vehicles for the express purpose of combating cable theft. In the City of Johannesburg, the Metro Police Department (JMPD) is at an advanced stage of establishing a Special Patrol Unit to deal with infrastructure protection, and the Group Forensic and Investigation Service (GFIS) is also coordinating the City’s long-term strategy.

But even all these interventions at local level are not enough. What is required is the full cooperation of all spheres of government. National government needs to come to the party and match the efforts of this local government if we are to have any chance of success. We will make this call again when we debate this matter in Parliament, but this is what is urgently required of national government:

Only through full cooperation between local, provincial and national governments – including specialised units within SAPS and Metro Police – and with the help of civil society, the business community and committed citizens – will we end the scourge of infrastructure theft and vandalism. These criminals have attacked all of us, and it will take a whole-of-society effort to fight them back.

The following speech was delivered by DA Leader, John Steenhuisen MP, during the party’s debate in Parliament today, wherein we demand that the ANC government slash fuel prices, by cutting the exorbitant 33% tax on fuel.

When the DA removes the ANC from national government in 2024, we’ll slash the petrol price by R6 per litre.

We’ll slash it by cutting fuel taxes and deregulating the fuel market.

We’ll slash it because we care about ordinary people, who are struggling to make ends meet.

Not every South African has millions of dollars shoved in a couch to weather them through this winter of discontent.

We care that workers can barely afford the taxi fare to get to work, and those without work can’t afford to even go out and look for work.

Government’s petrol price increases have pushed up food prices because all of South Africa’s food is transported by road now that the ANC has collapsed the rail system.

When the DA removes the ANC from national government in 2024, we’ll slash fuel prices by R6 to bring down the cost of food.

We’ll slash fuel prices by R6 because we care that households across the country are struggling to put food on the table.

The DA cares that parents and grandparents have to look into the eyes of hungry children and tell them there is nothing for supper.

And that millions of children are suffering from childhood stunting, which will harm them for the rest of their lives.

When the DA removes the ANC from national government in 2024, we’ll slash fuel prices to bring down input costs for businesses.

We’ll do it because we care about jobs and we know that jobs come from healthy businesses. Businesses that are thriving and competitive because they’re not forced to pay unnecessarily high input costs.

When the DA removes the ANC from national government in 2024, we’ll slash fuel prices by R6 because we know that high fuel prices hurt the poor hardest.

Poor families spend the highest proportion of their income on transport and food.

Cutting fuel prices by R6 will help lift millions out of poverty.

Madame speaker,
When the DA removes the ANC from national government in 2024, we’ll slash fuel prices because we can.

Fuel prices are high because government slaps on taxes which make up a third of the fuel price.

The government needs these taxes to fill the hole in the budget left from corruption and waste.

High fuel taxes are the price of a corrupt, incapable state.
The ANC is taxing people into hunger and joblessness.

They will tell people that petrol prices are high everywhere.

They will be lying.

That is how much more the people of South Africa are paying for petrol than in Botswana.

Our neighbours are paying R6 less because their government is not slapping on R6 of tax.

When the DA leads a national government in 2024, we’ll bring fuel prices into line with Botswana.

But South Africans shouldn’t have to wait two years to pay R6 less for petrol.

And they can’t afford to wait two years before they can pay for food and taxis.

We need to end the cost of living crisis now.

We need to recognise the urgency of the situation now.
We need to slash petrol prices now.

And we can afford to do it.

If we get tough on corruption, we can afford it.

If we end cadre deployment, we can afford it.

If we slash the presidential protection unit budget, we can afford it.

If we close or sell failing state-owned companies, we can afford it.

What the ANC can’t afford, is to keep ripping off ordinary South Africans.

Because ordinary South Africans are hungry. And we’re gatvol of paying for ANC corruption and waste.

We need a government that tightens its own belt, so we don’t have to keep tightening ours.

We need a cabinet that is lean and effective, not the largest cabinet in the world, that also needs a parallel cabinet because it can’t do its job.

We need a president that has full focus on running South Africa, not one eye on stashing his cash.

Your billionaire president can take his billion dollars and move. We can’t. We have to make South Africa work.

Your billionaire president is not affected by fuel prices. We are. And we’re struggling.

So if you care anything at all about the people of South Africa, show it by slashing fuel prices today.

The following speeches were delivered in Parliament on Tuesday, 07 June 2022.

The following speeches were delivered in Parliament on Wednesday, 25 May.

Noko Masipa MP – DA calls for AU to debate the escalating farm input costs caused by the war in Ukraine
DA Member on the Portfolio Committee on Agriculture, Land Reform and Rural Development
082 339 1626

The following speeches were delivered in Parliament on Friday, 20 May.

Mat Cuthbert MP – If we fail to safeguard our country’s infrastructure, we fail to protect our economy
DA Shadow Deputy Minister of Trade, Industry and Competition
072 267 7759