The speeches below were delivered during the debate on 16 Days of Activism for no violence against women and children in the National Assembly on Wednesday, 30 November.

The speeches below were delivered during the land ownership debate in the NCOP on Thursday, 10 November 2022

-Roy Jankielsohn– Debate on ensuring complete ownership to land reform beneficiaries and ownership to those living on trust land within communal areas.

-Willie Aucamp– Debate on ensuring complete ownership to land reform beneficiaries and ownership to those living on trust land within communal areas.

-Mbulelo Bara– Debate on ensuring complete ownership to land reform beneficiaries and ownership to those living on trust land within communal areas.

The speeches were delivered during mini-plenaries in the National Assembly on Thursday, 10 November.

The state of coalitions in local government

Cilliers Brink MP– How to protect coalition governments against sabotage

Building a culture of accountability and responsibility

Eleanore Bouw-Spies MP– Running a municipality is not Rocket Science!

Prevalence of corruption, poor management and incompetence in public healthcare

Michele Clarke MP– No accountability in the Department of Health

Haseena Ismail MP– The impact of corruption, poor management and incompetence in public healthcare violate the Constitutional right to healthcare 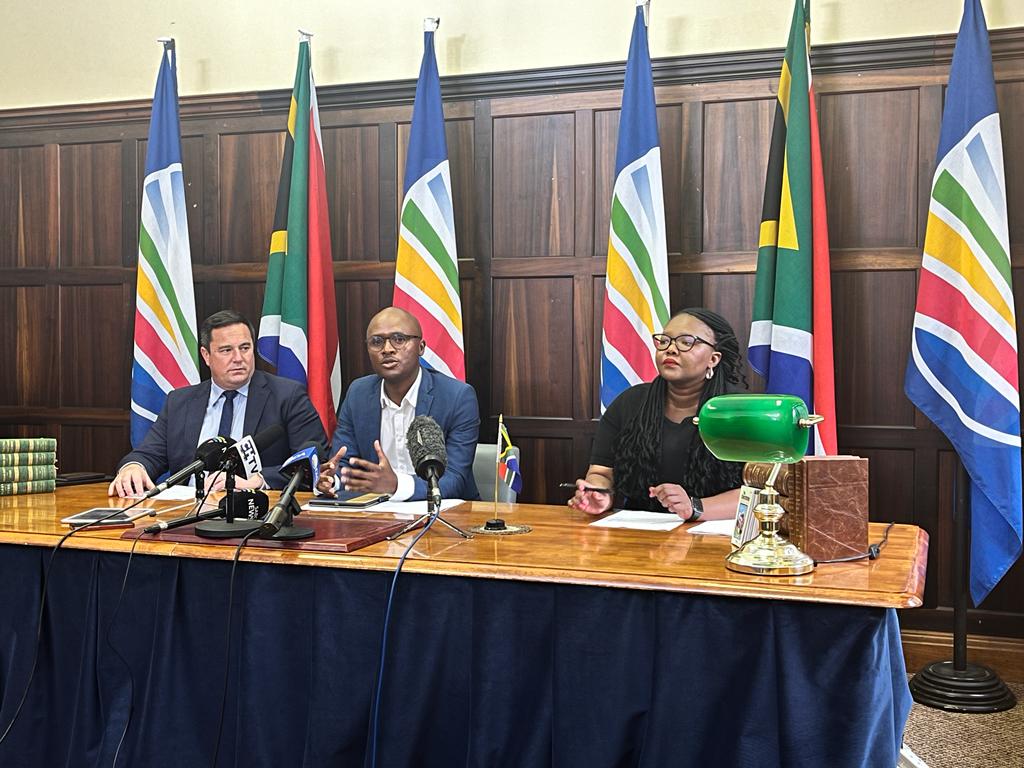 Download pictures from the media briefing here and here.

Through three Private Members Bills, the DA will be introducing legislation to stabilise coalitions after the 2024 national and provincial elections.

Part of the DA’s legislative agenda in the run up to the 2024 elections is to prepare parliament for the likelihood that for the first time in 70 years, the era of one-party domination is coming to an end. We need to prepare for coalition politics. South Africa’s electoral legislative frameworks needs to catch up with the state of our democracy and current South African reality.

The ANC is in a downward spiral and is currently taking the country down with it. The situation is very bad and getting worse, with poverty, service delivery failures, crime, corruption, debt and unemployment running out of control. We cannot afford to replace failing ANC governments – whether at national, provincial or local level – with unstable, cumbersome coalitions.

Yet this is exactly what happened in Johannesburg, Tshwane, Ekurhuleni and Nelson Mandela Bay metros after the 2021 local government election. In these metros, residents face the constant risk of disrupted service delivery. If the current state of metro coalitions is replicated at national and provincial government level post 2024, it will lead to permanent instability, with South Africa possibly even becoming ungovernable.

If coalitions are to be the future in South Africa, then Parliament needs to take the necessary legislative steps to ensure that they are stable and able to deliver. Many other countries have done just this, and are governed by successful, stable coalitions. If we fail to stabilise coalitions, poorest communities will bear the brunt of their dysfunction, since they are most reliant on government services.

With this in mind, and considering international best practice, the DA has developed five proposals. None of these ideas is set in stone. They are a starting point for consultation with other political parties and broader society, to help find consensus on legislation to ensure stable, successful coalitions.

Implement an electoral threshold of 1 or 2% (pending consultations with other political parties and broader society) for national, provincial and local governments. This would require a political party to secure 1 or 2% of the overall vote to qualify for seats in a legislature or council.

Proportional representation electoral systems tend to encourage a fragmentation of politics into a large number of parties. In South Africa this is particularly extreme because a party can get a seat in a legislature with just 0,2% of the vote. Yet even a party this tiny, with minimal electoral support, can bring down a government if that party’s seat is needed to make up 50%-plus-1 in the coalition.

As “king makers”, tiny parties can wield power that is far out of proportion to their electoral support. This makes them vulnerable to being bribed by larger parties that need their support to get into government, posing huge risk to the stability of coalition governments.

Tiny parties with minimal electoral support should not be able to determine whether the ANC or DA runs a government. That is a subversion of democracy. Yet this is currently the case. We have seen this play out in many local governments recently, most notably in Johannesburg last month. The effect will be even more disastrous at provincial and national level.

Other countries with Proportional Representation electoral systems, such as Germany, Denmark, Austria, Belgium and Greece, have avoided this instability by setting electoral thresholds. In Germany, parties require a minimum of 5% of the electorate’s support to get into national government while in Denmark it is 2%, Austria 4%, Belgium 5%, and Greece 3%.

By preventing a proliferation of tiny parties, an electoral threshold also prevents cumbersome coalitions consisting of large numbers of parties, such as those currently in place in Ekurhuleni (10 parties), Tshwane (7 parties), and NMB (10 parties). Decision-making is naturally more cumbersome and large coalitions battle to act with common purpose.
Inevitably, delivery is compromised, hitting vulnerable households hardest, since they are most reliant on government services.

We recognise that electoral thresholds involve a tradeoff, since they compromise on pure proportionality. This is why the DA suggests a very low threshold. However, with so much at stake, we do not believe that no threshold at all is tenable. The reality is that we’re going to have to trade off some degree of proportionality for workability.

The Constitution specifies that elections “must result, in general, in proportional representation” (section 46 (1) (d). The exclusion of minor parties under the percentage threshold will still satisfy the requirement for “general proportionality”, because the vast majority of voters will still have their chosen representatives elected.

South Africa can learn from Kenya where political parties who negotiate to enter into a coalition are required, by Kenya’s Political Parties Act of 2007, to deposit their written political agreement with Kenya’s registrar of political parties.

To entrench public accountability in coalition governments, South Africa can benefit from the Kenyan concept which includes an independent Registrar of Political Parties and a Political Parties Disputes Tribunal to address any disputes that may arise during the lifespan of the coalition agreement.

South Africa could establish a Registrar of Political Parties to impartially administer coalition agreements and ensure that coalition partners commit, to the fullest extent possible, towards the maintenance of the coalition agreement. The registrar should be a politically independent individual of high standing such as a retired judge.

The DA believes that the time allowed for President, Premiers and Mayors to be elected should possibly be extended from the current 14 days from the declaration of the election result. This is to give parties sufficient time to negotiate functional, binding coalition agreements.

5. Limit Motions of No Confidence

In consultation with other parties, the DA will investigate limiting the frequency with which motions of no confidence can be brought within a legislature. This will be bearing in mind the Mazibuko vs Sisulu Constitutional Court case which dealt with MONCs in the National Assembly, and the provisions of the Constitution which may need to change (section 102 and 141). Setting a limit on the frequency of MONCs will give the governing coalition an opportunity to govern without the constant distraction and threat of being removed.

These 5 legislative changes would be implemented through the introduction of three separate Private Members Bills (PMBs).

In setting out these proposals, we hope to establish broad political and civil society support for the legislative changes required for stable coalition politics. We believe this matter is urgent and crucial for a successful, prosperous, united South Africa.

Please find attached the speeches that were delivered during the Second Reading debate of the Expropriation Bill, and adoption of the Committee Report on Wednesday, 28 September.

The following speeches were be delivered in Parliament on 27 September during the debate on the establishment of the Phala Phala Ad Hoc Committee.

Leader of the Democratic Alliance

Siviwe Gwarube MP- Do we simply turn a blind eye to Phala Phala allegations because of party politics?

Chief Whip of the Official Opposition

The following speeches were delivered in Parliament on 22 September during the National Assembly’s debate on the cost of living crisis in South Africa.

DA Member on the Portfolio Committee on Transport

The following speeches were delivered in Parliament on 19 September during the National Assembly’s Heritage Day debate.

DA Member on the Portfolio Committee of Sport, Arts and Culture

The following speeches were delivered in Parliament on Wednesday, 07 September during the debate on the Children’s Amendment Bill.

The following speeches were delivered in Parliament on Wednesday, 31 August during the National Women’s Day debate.

Luyolo Mphithi MP – Men, we need more guts. We must challenge each other to bring change

DA Shadow Minister on Women, Youth and Persons with Disabilities