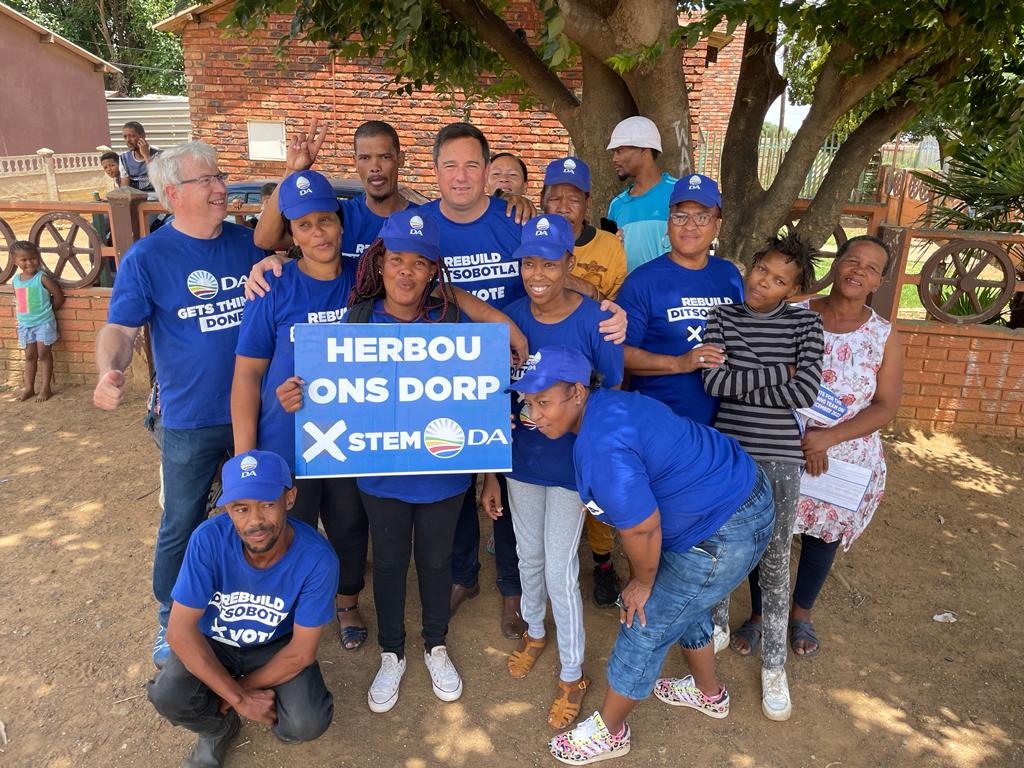 Today I am in Lichtenburg, North West joined by DA activists and public representatives as we campaign ahead of a crucial by-election in the Ditsobotla Local Municipality. I am engaging with residents and business owners, and joining local community organisations to fill potholes and assess the dismal state of this municipality under the ANC. Ditsobotla was dissolved due to intensified factional battles within the ANC government which threatened to tear the municipality apart.

The DA is here to kick the ANC out, and usher in a DA government to begin the vital work of rebuilding this once vibrant North West town. In the 2021 Local Government Elections, the ANC only won 52% of the vote in Ditsobotla, winning by a very slim majority. We can break the ANC’s majority in Ditsobotla, and usher in a coalition of real change and delivery.

After almost 3 decades of corruption and neglect under the ANC, Ditsobotla is now a broken municipality. The local agricultural sector and small business are suffering under the weight of service delivery collapse and poor infrastructure maintenance, especially around water and sanitation, electricity, and roads. This has led to disinvestment and a rapid economic slump which have plunged residents into unemployment, despair, and misery. The ANC has failed the people of Ditsobotla for decades.

Where the DA governs in local municipalities across South Africa such as Umngeni in Kwazulu-Natal, Midvaal in Gauteng, and Kouga in the Eastern Cape, we are delivering for residents and getting things done.

In Umngeni we settled the ANC’s legacy of municipal debt within our first year of office, and rapidly expanded access to basic services while aggressively repairing public infrastructure. Midvaal and Kouga are the best-run municipalities in their respective provinces, where residents enjoy some of the highest access to basic services in South Africa, which sustain growing local economies and create much-needed jobs. We want to bring a better life filled with hope and opportunity for the people of Ditsobotla in a province that serves as a hallmark of ANC neglect.

As South Africa approaches a watershed General Election in 2024, we will see, for the very first time, the ANC lose its outright majority at a national level. But this is already happening in small towns across the country.

South Africans are tired of having no jobs, we are tired of not having electricity to run our businesses and our lives, and we are tired of living in towns and cities where money meant for services is stolen by connected ANC cadres and cronies. The ANC cannot save itself, and it cannot save South Africa. It is time for South Africa to enter into a new post-ANC era where we can truly realise the vision of a prosperous, opportunity-rich society for all.

The mission to achieve this starts here and now in places like Ditsobotla. We can no longer allow the ANC to run our towns and cities into the ground. Let us vote DA so that we can rebuild Ditsobotla together.