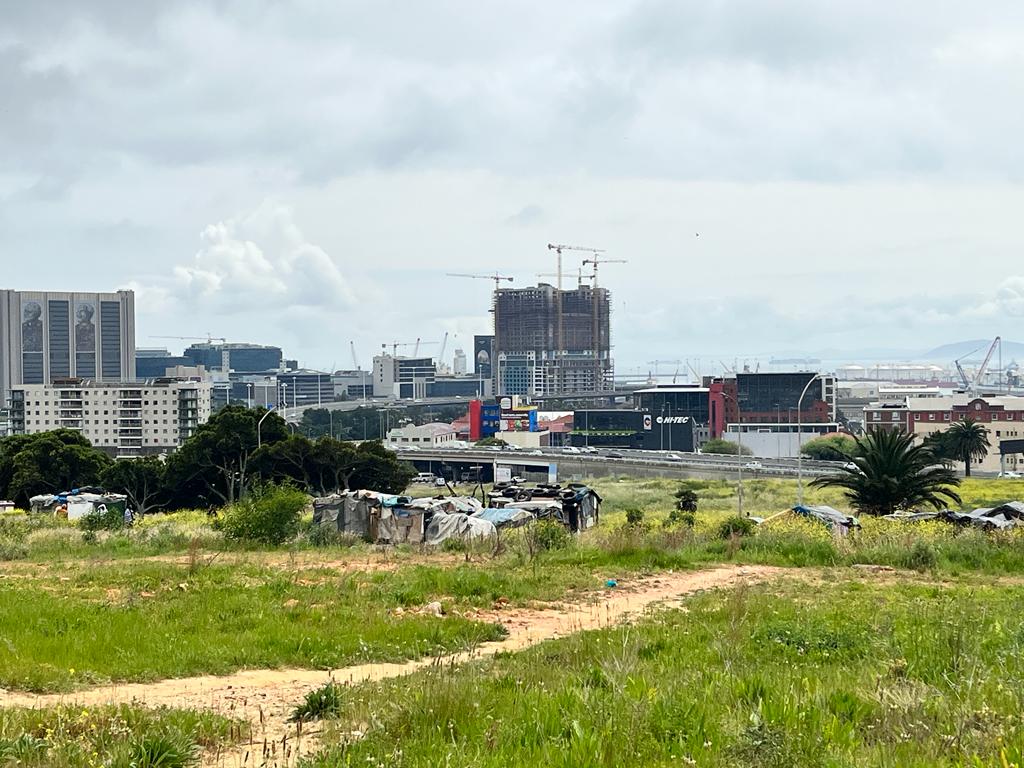 Friday, 30 September 2022, the Democratic Alliance’s (DA) Shadow Minister of Human Settlements, Emma Powell, together with the City of Cape Town’s Mayoral Committee Members (MMC’s) for Safety and Security, Jean-Pierre Smith, and Human Settlements, Malusi Booi conducted an oversight visit to District Six to observed the scale of the most recent land invasion at this historic site.

The issue of orchestrated and illegal land grabs has become a crisis across South Africa, placing immense financial burdens on all major Metropolitan Municipalities and thousands of private land and property owners.

While land invasions have been a problem for many years, the start of the Covid-19 lockdown vastly accelerated the crisis, with an estimated R2.5 billion worth of property subsequently lost to invasions in Cape Town alone.

In the last two years, the City of Cape Town has responded to more than 14 500 land invasions, and cleared almost 180 000 pegs and structures. In the violent protests that have followed these operations, 80 officers have been injured, and more than 94 vehicles destroyed.

To illustrate the scale of the crisis, the Western Cape Department of Infrastructure spent in excess of R162.2 million last year on security preventing land invasions. In Cape Town, R142.8 million was spent on security costs.

For the 2020/21 financial year, the Western Cape Department of Human Settlements spent more than R 355,8 million to prevent illegal land invasions and the illegal occupation of completed units.

Whilst the City of Cape Town’s Human Settlements Department spent more than 97% of its budget during the 2021/22 financial year, the rapid delivery of housing has become severely hampered by the scale of illegal invasions.

The City now has more than 800 Informal Settlements, many still requiring basic services that must be provisioned from grants administered by the national Department of Human Settlements.

Despite more than 350 000 residents waiting on the City of Cape Town’s database, more than 20 000 beneficiaries have been deprived of their rightful housing opportunity as a result of land invasions.

In the absence of any action being taken by the ANC to address the crisis of illegal land grabs, the DA has now submitted to Parliament a Private Members Amendment Bill to the Prevention of Illegal Eviction from Unlawful Occupation of Land Act 19 of 1998.

Unless the legislation that currently protects illegal land occupiers is challenged, the situation will continue to worsen.

The intention of the Amendment Bill is as follows:

– Create punitive measures for those who incite or promote orchestrated and unlawful invasions;

– Provide explicit criteria that must be satisfied during court proceedings prior to a municipality being ordered to provide alternative accommodation to illegal occupiers;

-Allow the courts to determine and limit the length of time alternative accommodation would need to be provided for an unlawful occupier;

– Compel the courts to explore the reasons for the invasion, as well as the maintenance obligations of the occupier’s family when considering judgement;

– Provide an explicit definition of what determines a ‘home’.

The DA has always been at the forefront of protecting property owner’s rights, whilst ensuring that the poorest and most vulnerable in our society are cared for by the State within its available resources.

We ask that members of the public express their support for the bill by telephoning their local radio stations, phoning their local MP’s, sharing information about the bill on social media, and submitting your comments to us at legislation@da.org.za.

Copies of the draft bill can be found on our website.