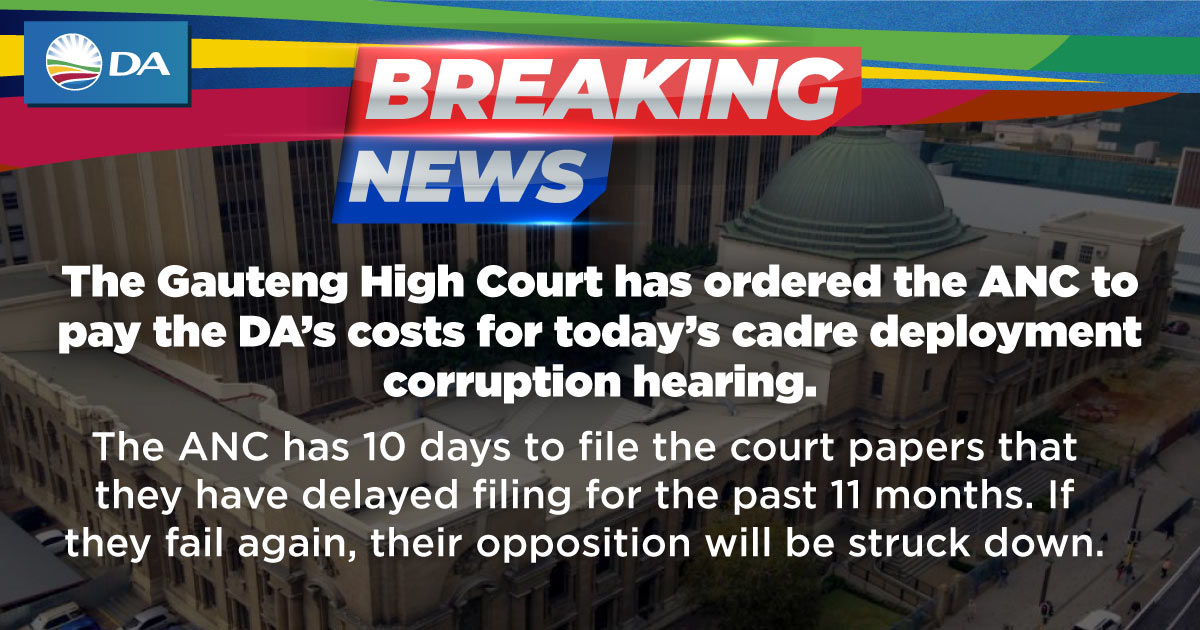 The DA has today won yet another battle in our ongoing war to expose and abolish the ANC’s system of cadre deployment corruption.

Following months of delays right out of the ANC’s Stalingrad playbook, the Gauteng High Court today ordered the ANC, which is so bankrupt that it cannot even pay staff salaries, to pay the DA’s costs for the delays.

The court also directed the ANC to file its Heads of Argument – which have been outstanding for the past 11 months – within ten days. Should it fail to file these documents, the ANC’s opposition will be struck down and the DA will win the case.

In terms of the Promotion of Access to Information Act (PAIA), the DA has asked the court to compel the ANC to hand over all records of discussions and decisions by the cadre deployment committee – including meeting minutes, documents, emails and Whatsapp conversations – dating back to 1 January 2013.

Our ultimate victory in this matter will also enable us to provide complete transparency to the people of South Africa over the personal role played by President Cyril Ramaphosa in capturing and corrupting the state, as he was head of the deployment committee between 2013 and 2018.

We will not rest until we have exposed the full truth that the ANC is the fundamental cause of state capture corruption to the people of this country.

Today’s victory is however also part of a much bigger strategy to not only expose this evil practice, but to abolish it once and for all. On 23 and 24 January 2023, the DA will be back in court for our second case against ANC cadre deployment, where we are asking a full bench of the North Gauteng High Court to declare this system unconstitutional and unlawful.

The continuous electricity blackouts that our country is currently suffering under is a daily reminder of the cost of ANC cadre deployment corruption. Government departments and state-owned entities like Eskom have been looted dry and robbed of skills, because the system of cadre deployment unconstitutionally gives the ANC the power to appoint public sector officials on the basis of loyalty to the corrupt ANC, rather than on the basis of skill and their ability to do the job.

The DA is waging this war against cadre deployment because we care about the rights of South Africans to receive honest and quality services. The only way to achieve that is by replacing cadre deployment with merit-based appointments.

The DA is committed to turning the ANC into a minority party in 2024, whereafter we will form a new government and use these court victories to abolish cadre deployment in favour of a reformed system where all appointments are based on demonstrated merit and skill.