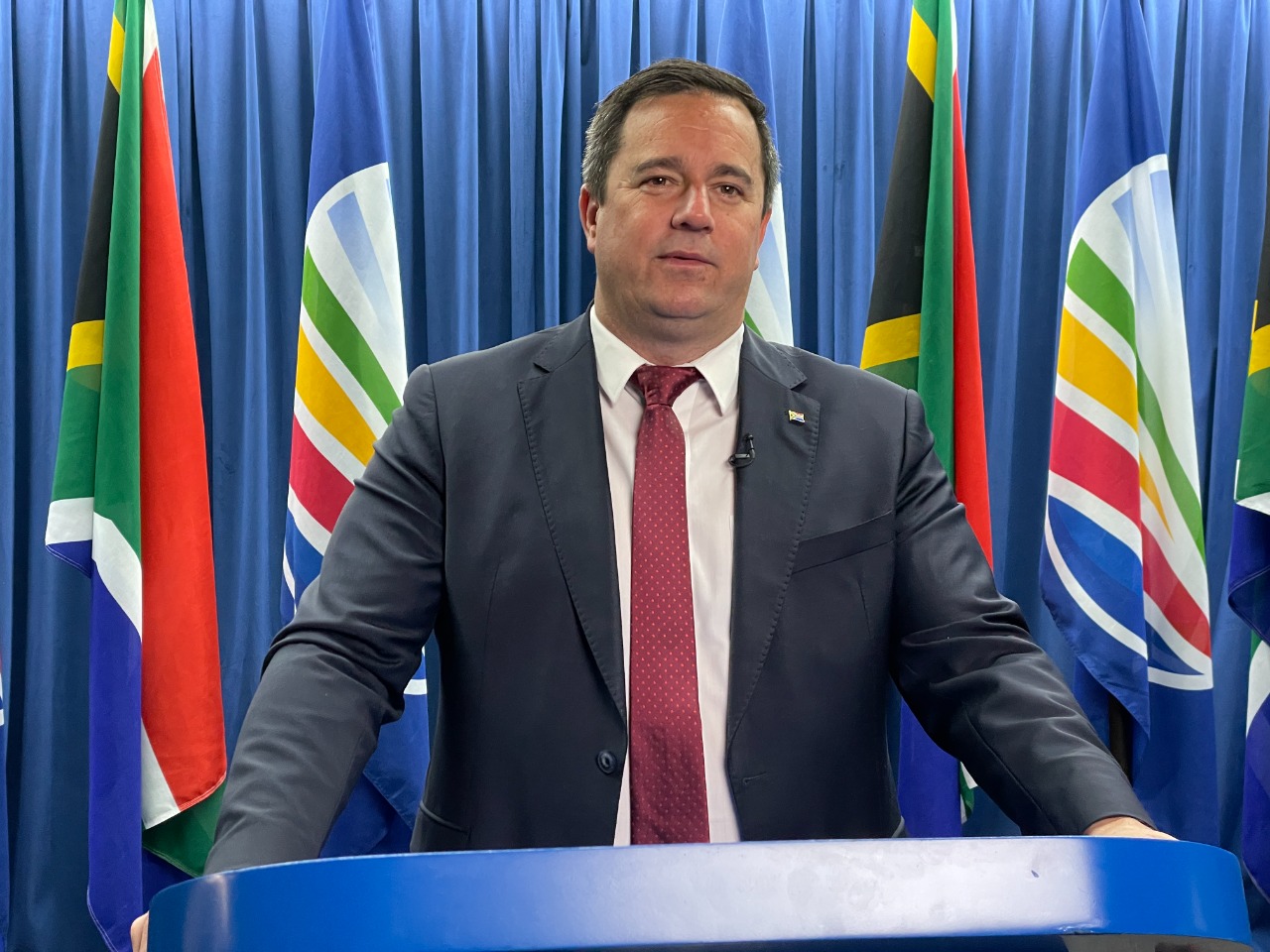 The following speech was delivered by DA Federal Leader, John Steenhuisen MP, addressing the nation on solutions to urgently tackle Eskom’s imminent collapse and fast track the procurement and provision of electricity to our nation.

As you are no doubt aware, South Africa is in the midst of an electricity crisis that threatens to derail what is left of our economy and destabilise our society.

At Stage 6 – and with talk of even higher stages of load-shedding if the situation at the stricken generation units doesn’t improve soon – we are teetering on the brink of a complete collapse of our grid. This will spell disaster for our entire country.

This is the second time this year that we have breached Stage 6, but whereas last time was only for short periods as units were brought back online, the language this time round is far more ominous.

We have been warned to expect extended periods of high-stage load-shedding, and it’s been hinted that this could go beyond stage 6. We’ve even learnt, from an Eskom press conference, that they were considering a permanent load-shedding arrangement – to “normalise” a lower stage such as stage 2.

There is no doubt that the level of crisis is now far worse than it’s ever been.

And while Eskom’s CEO and COO have finally started to change their language to reflect the true severity of the situation – with words like “catastrophe” now entering their press conference vocabulary – the same cannot be said for President Ramaphosa, Minister Mantashe or Minister Gordhan.

These are the people directly tasked with fixing this crisis, but there is no sign of real urgency from them. In fact, they are proving to be the biggest obstacles to solving the crisis.

At the end of July, President Ramaphosa launched his latest plan to deal with load-shedding, to much fanfare and nods of approval from the media and energy role-players. But two months later, almost every aspect of this plan has stalled.

The DA has been running an implementation tracker of this Energy Response Plan, and I can share with you today that there is no part of the plan that is on track. This is largely due to a lack of urgency, with no measurable targets or clear timelines attached to any of the project deliverables.

The most urgent short term goal of this plan was to improve the operational performance of Eskom’s existing fleet of power stations, but this plant maintenance process has clearly derailed.

Two months into it, South Africans still have no clarity on any of the promises made in the plan. This includes the recruiting or re-hiring of experienced engineers and managers, the procurement of electricity from neighbouring countries, steps taken to combat sabotage and theft at Eskom, and the plan to incentivise residential and commercial solar installations.

At the heart of this lethargy is the so-called Crisis Committee appointed by the president to take over the implementation of his plan. They have made no progress at all and should be taken off the job right away.

But they cannot be replaced by another set of ANC politicians. We cannot repeat the same actions and hope for a different outcome.

This crisis calls for outside industry experts to lead the way.

What we are proposing is that the President immediately dissolve the National Energy Crisis Committee, and appoint in its place an outside industry expert to oversee the implementation of the Energy Response Plan.

It is critical that this person is both apolitical and a leading expert in the energy field, and that he or she is sufficiently empowered to do whatever it takes to stabilise our current generation fleet and bring additional generation on board, without having their hands tied by the red tape that has held our recovery back until now.

This will require the executive authority to assemble a team of experts, the authority to oversee the hiring of engineers and managers without having to answer to racial bean counters in any ANC ministry, and the power to make decisions on the procurement of additional electricity from independent producers, free from the stifling regulations imposed by the likes of Minister Mantashe, and Minister Patel, who is still insisting on 35% localization for bid window 5 – clearly oblivious to the fact that we are approaching a national catastrophe.

This is perfectly in line with the whole-of-society approach to fixing our country’s many problems, and this electricity crisis should be a wake-up call to government that expert outside help is the only way forward.

It is abundantly clear that the Energy Response Plan is dead in the water in the hands of the President’s Crisis Committee, because it has become the scene of a political turf war between ministers and ministries.

It is essentially a good plan, but both minister Mantashe and Minister Gordhan should be kept as far away from its implementation as possible.

But not only these two ministers and the Crisis Committee. The President himself must hand over the plan to someone who can and will see to it that progress is made.

President Ramaphosa has, in some way or another, been in charge of overseeing Eskom’s recovery and the stabilisation of our electricity supply for the past twelve years – first during his time as Deputy President when he was tasked with overseeing the turnaround of state-owned enterprises, followed by the past four and a half years as president.

In 2015 he famously told us that in another 18 months we’d forget that these electricity challenges ever happened.

Since then he has not stopped telling us, in SONA after SONA, how much progress has been made, and how Eskom has been put on a path to recovery.

None of this is true though. Our energy situation has regressed substantially and Eskom has never been worse off.

During his term as president we’ve been told about nine-point plans, seven-point reforms, and now the latest five-point Energy Response Plan, and yet nothing of this has materialised. Since he became president, South Africa has shed 4 136 GWh of electricity, and this past weekend we were down to half our generation capacity.

He’s had his hands on the wheel for over a decade, and in that time our energy situation has deteriorated sharply. He needs to face the sober reality that neither he nor his ministers are capable of solving this predicament. They have lost control and our country is spiralling into disaster.

When you are clearly out of your depth, no one will blame you for calling in expert help. In fact, they will applaud it. And that is the only way out of this crisis.

But in addition to appointing this outside expert whose sole and single-minded focus must be the recovery of our electricity supply, there are a number of additional steps which the DA has already called for on numerous occasions that still need to be put in place.

The first of these is the immediate declaration of a ring-fenced State of Disaster around Eskom and our electricity supply.

This will allow for the circumvention of the current stifling web of legislation that prevents the acquisition of additional power from Independent Power Producers.

The second is the firing of Minister Mantashe. It is incomprehensible that he has managed to remain in this crucial position despite his multiple failures.

He is responsible for the dysfunctional regulatory framework that has prevented our energy sector’s recovery, he has repeatedly blocked renewable energy projects, he has allowed the Risk Mitigation Power Producer Procurement Programme to stall in the middle of the crisis, and he cannot see beyond coal. He must go, and he must go now.

Then there is the establishment of an ad-hoc committee into the energy crisis. Parliament cannot be a spectator at a time like this. We need to give it back its teeth and allow it to play the oversight role envisaged by the authors of our Constitution.

For too many years, this ANC government and its presidents were allowed to declaw Parliament and turn it into a rubber stamp of ANC policies and programmes. That has to end now.

What is also required is a comprehensive and publicly available mitigation plan in the event of ongoing high-stage load-shedding.

Our energy crisis reaches much further than just the lights and appliances in our houses. In towns and cities across the country, the knock-on effect of these extended blackouts will lead to a series of secondary crises that will threaten the lives and livelihoods of our citizens.

From sewage pumps and cell towers to schools and medical services, communities rely on services that require dependable electricity.

The Western Cape Government, through its Provincial Disaster Management Team, has just announced a detailed plan to deal with the worst-case load-shedding scenarios. The purpose of this plan is to ensure that critical services remain operational, even if high-stage load-shedding were to continue.

I encourage President Ramaphosa to study this plan, because there are many aspects of it that can be rolled out across the country. South Africans need to know that someone has thought of and planned for every eventuality.

And finally, we need to see timelines and firm deliverables set to the Energy Response Plan. Because left open-ended, as it currently is, nothing will happen and no one will be held accountable.

If the president heeds our call and appoints an outside expert to head up this recovery, their first task must be to set out clear targets and timelines.

This person will also have to have to facilitate a working relationship – a partnership, even – between Eskom, Independent Power Producers and local governments. Because, for the foreseeable future, Eskom is still going to be central to our recovery, and it is critical that they are given the support they need.

I have no doubt that such an industry expert would concur with most, if not all, of the DA’s many recommended interventions to fix our electricity crisis.

It also includes incentivising small-scale systems such as rooftop solar by easing the regulatory burden to make it easier and cheaper for homeowners and businesses to install their own generation capacity.

Then there are the medium-term interventions such as enabling municipalities to procure their own power by issuing a blanket Section 34 Determination that will allow them to buy, generate, distribute, sell and store electricity. Or compelling NERSA to speed up its regulatory approach so that generation projects can be approved quicker.

There are the long-term interventions such as the long-overdue review of the country’s Integrated Resource Plan, expediting outstanding IPP bid windows, and encouraging private/public partnerships in infrastructure investment.

None of these things are radical or contentious. They’re just good old common sense, but they do require a government that can see past its own desire to cling to power and control.

This crisis has to be a wake-up call for President Ramaphosa and his government. A sign that, when it comes to keeping the lights on, they are out of their depth, and their “command and control” approach to government belongs on the scrapheap of history.

If we want to move forward as a nation, we have to be forward-thinking in everything we do. And particularly when it comes to tackling this energy crisis.

Finally, I will be liaising with DA governments around the country to ensure that they are doing everything possible to shield citizens from the ongoing failures of national government.