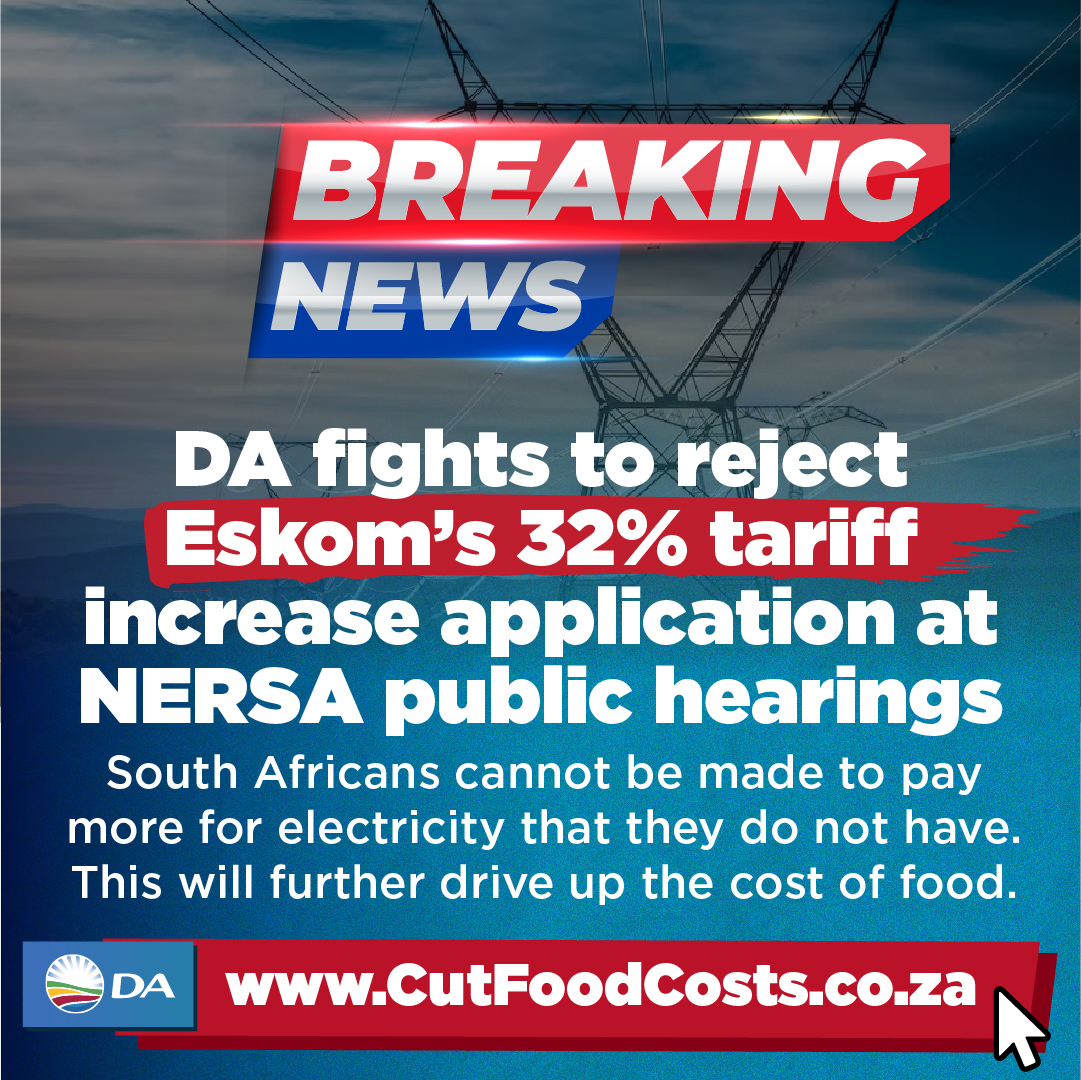 This is an abridged version of a speech that was delivered at the ongoing NERSA public hearings into Eskom’s tariff application by the DA Shadow Minister of Public Enterprises, Ghaleb Cachalia MP.

Chairperson, there is no need to sugarcoat this – the 32,02% tariff increase application submitted by Eskom for its Fifth Multi Year Price Determination is immoral and completely out of touch with the cost of living nightmare the majority of South Africans are experiencing.

If NERSA goes ahead and approves this exorbitant tariff application, which is 4 times the current rate of inflation, the socio-economic impact on the poor will be immediate and disastrous. Energy poverty will increase exponentially as people disconnect from the grid due to unaffordability; small businesses will fold; tens of thousands will join the ranks of the unemployed and South Africa will stare down the barrel of possible social unrest.

This is the devastating cost that Eskom is asking South Africans and our struggling economy to shoulder via this application which is possibly the highest on record ever submitted to NERSA.

Consumers cannot pay for electricity that they do not have

Quite how anyone can expect people to pay for electricity that they do not have, is beyond the ken of any reasonable person. As I make this presentation, the country is in the midst of a crippling loadshedding episode that has left consumers facing up to 10 hours without electricity. As if that is not enough, while consumers contend with the disruption that these blackouts have brought to their lives, Eskom now proposes to decimate their disposable incomes with this wholly immoral increase.

As recently as a week ago, Eskom announced in its power outlook for 2023 that the ‘likely risk scenario’ for load shedding remains high. In fact, the utility’s senior executives admitted that they considered the possibility of a permanent load-shedding arrangement which would result in the normalisation of a lower stage of loadshedding such as stage 2 – trapping Africans in a semi-permanent state of power blackouts for the foreseeable future.

With 2022 on course to become the worst loadshedding year on record, it is simply unacceptable for Eskom to charge high tariffs on a product that they are patently unable to deliver. The Eskom business model has failed and consumers should not be asked to bear the cost of a company on ‘life support’.

Electricity consumers are told that Eskom’s tariff application is calculated based on total allowable revenue and predicted energy sales. Factored into this cost model, is the exponential increase in the fixed monthly charge.

Essentially, households and businesses are being asked to pay for electricity, regardless of whether they have it or not. There is a phrase for this kind of business practice – it’s called ‘corporate extortion’.

At operational level, consumers are being asked the carry the financial cost of redundancies within the Eskom system. It is public knowledge that Eskom has a bloated workforce, whose compensation puts upward pressure on its severely constrained balance sheet. A 2016 World Bank study found that Eskom was potentially overstaffed by 66%. This is more than double the norm in 35 other countries on the African continent.

Despite these inefficiencies, Eskom’s 32% tariff increase application is essentially an abuse of the market dominance of a monopoly and a transparent attempt to overcompensate for lack of investment in new generation capacity – the result of monies squandered in preferential procurement, failed BEE, ineptitude and theft.

How do you force the poor to choose between food and electricity?

Eskom’s 32% tariff increase application will create a situation where poor households will be made to choose between putting food on the table or paying for electricity. It is a choice that no family should have to make.

With rising food prices, half the population is struggling to get enough nutrients into their bodies. Inflation surged to 7.8% in July, the highest since May 2009, with food price inflation at a high of 8.6% in June, putting huge pressure on low-income household budgets.

Amidst this raging hunger pandemic, Eskom has chosen to abdicate on its corporate social responsibility by inflicting more pain on the vulnerable. Increasing the cost of energy on the magnitude that Eskom is requesting will price out more and more people out of the electricity market. Such an eventuality will be a clear violation of Eskom’s statutory obligation to provide cheap and affordable electricity.

NERSA councillors have a choice to make. They can either stand on the side of our citizens struggling to survive in this tough economy or they can give in to Eskom’s unconscionable demand.

NERSA is duty bound, as per its obligations under the NERSA Act, to ensure that Eskom is not rewarded for keeping South Africans in the dark. The honest truth is that South Africans cannot be made to pay more for electricity that they do not have.