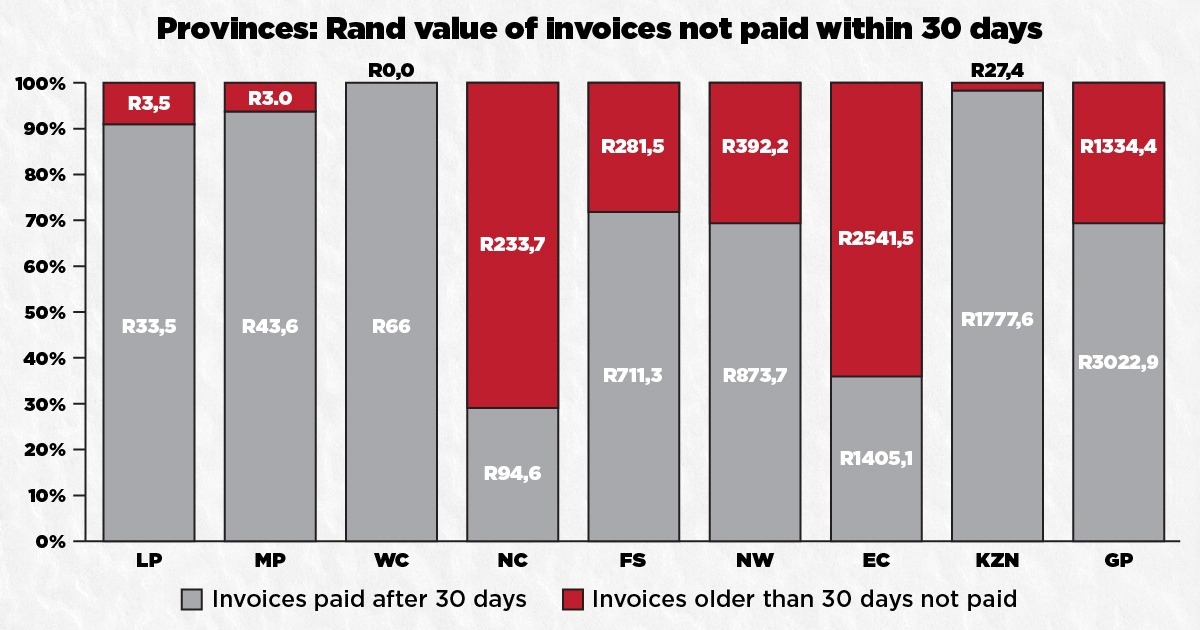 During a meeting today of the portfolio committee on public service and administration, the Public Service Commission (PSC) revealed shocking new information on how the South African government is actively destroying private businesses in this country. Download the presentation here.

Instead of supporting small businesses that are already being crippled by ten hours of power blackouts every day, the government is adding to their suffering through its failure to pay nearly R9 billion in outstanding invoices owed to private service providers.

According to the PSC’s latest research, during only the first quarter of the 2022/2023 financial year, national government departments failed to pay R4.1 billion owed to service providers within 30 days. The 8 ANC-led provincial governments further added to the misery of small business owners by failing to pay an additional R4.8 billion during this quarter. Amidst a profound economic and electricity crisis, the ANC-led national government and the 9 provinces controlled by the ANC withheld nearly R9 billion it legally owes to small businesses during the last quarter.

The PSC’s findings also show that there is only one provincial government in the entire country that functions and cares: the DA-led Western Cape. The Western Cape is the only provincial government that cares enough about the plight of business owners to consistently pay them on time. While ANC-run provinces like the Eastern Cape (R2.5 billion) and Gauteng (R1.3 billion) clearly could not care less about service providers, the Western Cape stands out for not owing businesses even one cent in unpaid invoices.

The ANC can never say it was not warned about the devastating consequences of its uncaring attitude towards small businesses. In its presentation to the portfolio committee meeting, the PSC emphasised in bold red letter that “small businesses live or die by their cash flow. If they’re not paid, they can’t survive.” The PSC also asked: “Is government contributing to the killing of businesses? Is government complicit in destroying jobs?” Clearly, the answer to both of these questions is a resounding “yes.”

The statistics released today make it clear that the ANC is the fundamental cause of the economic and unemployment crisis facing our country. Outside of the caring government in the DA-led Western Cape, the South African state is actively abusing its power to suffocate small businesses out of existence.

The DA will be writing to President Cyril Ramaphosa’s office to request him to urgently engage with Western Cape Premier Alan Winde, so that Premier Winde can teach the President how to make an online EFT payment.

We will also be submitting a series of follow-up questions to the worst offending departments, which include Water and Sanitation (R2.6 billion), Traditional Affairs (R705 million), Statistics South Africa (R600 million), Social Development (R92 million) and Forestry Fisheries and Environment (R72 million) to force them to account for their roles in destroying South African small businesses.