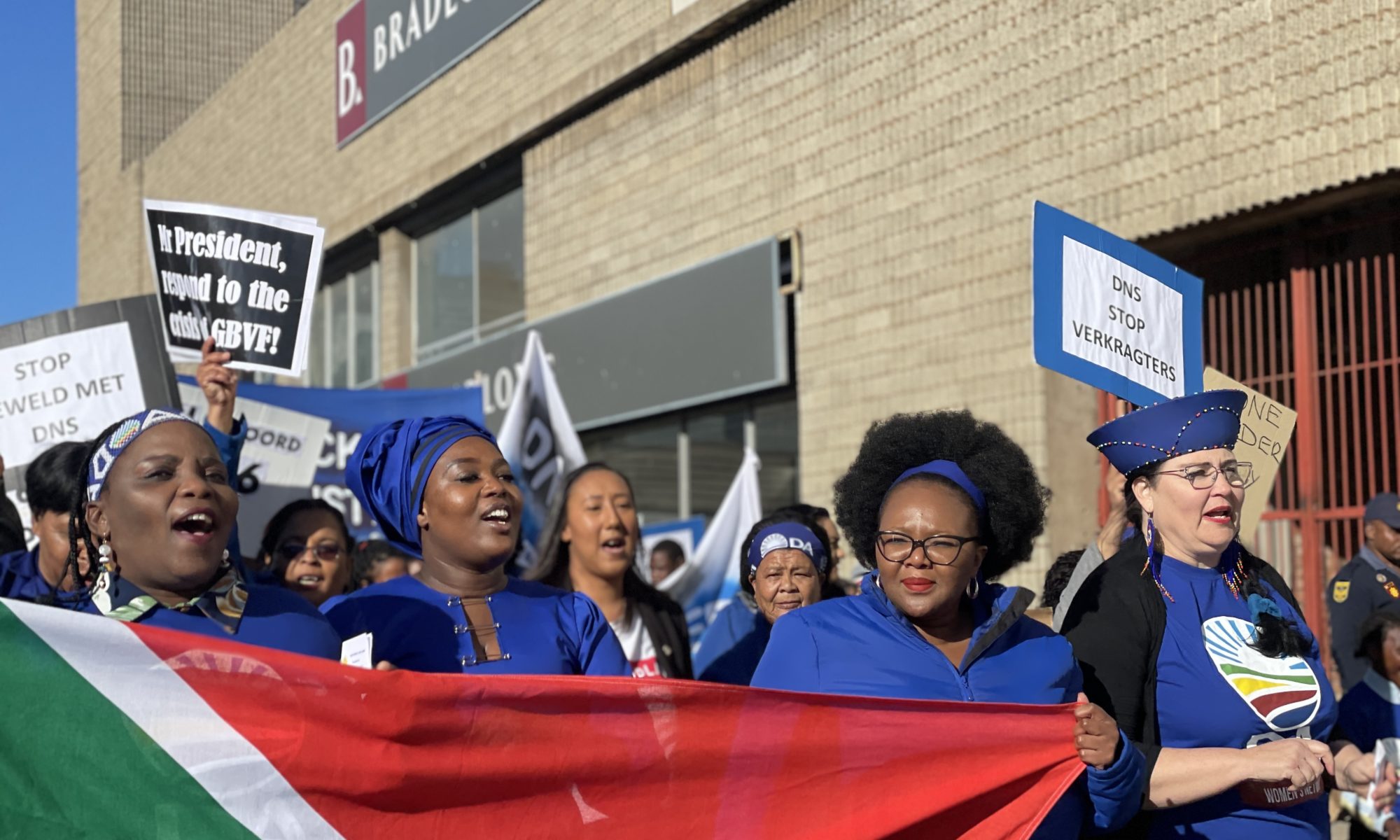 Note to editors: The following speech was delivered by Siviwe Gwarube MP, following a march to the Phakamile Mabija Police Station in Kimberley. Find attached soundbite, handed over memorandum here and pictures here, here and here.

It has been 66 years since South African women marched to the Union Buildings against the Apartheid pass laws.

We pay tribute to those women who put their differences aside and fought bravely against an oppressive regime.

Theirs was a fight for equality and against oppression.

In 2022, South African women have a different fight on their hands.

A war has been declared against the women of this country.

The war rages on; our bodies used as battle fields.

While the rest of the world is grappling with issues of gender representation or equal pay, we are stuck in a hell-loop, begging for our lives to be spared.

Women’s Day is not a Gender-Based Violence and Feminicide (GBVF) awareness day.

It is an opportunity to take stock of how far we have come and how much further we have to go to achieve true gender equality.

But how can we?

When we have a Police Minister in Bheki Cele who considers a woman lucky to have escaped being gang-raped?

A leader in government who tells people to shut up when they raise their concerns about safety in our communities;

A Minister who has presided over the DNA backlogs crisis denying justice to hundreds and thousands of victims of rape, murder and violent crimes.

That means even the cases that are reported to the police are not being solved because these samples are stuck in the system.

Can you imagine being let down like this by your last line of defense as a citizen?

Why should we beg for justice?

Is it because ANC ministers do not have to worry about their safety on a daily basis?

Because they are protected by the police 24/7, while millions of women in this country are living in a war zone?

Yet police stations in communities like this only have the bare minimum.

It is no wonder that this is not a priority for them.

It is not their lived reality.

Theirs is a life of armed police, high rise fences and blue lights.

For millions of women theirs is life of sexual abuse and violence from strangers and family members alike.

A life of consistently looking over your shoulder.

A life that could be cut short and your body disemboweled and shoved into a rubbish bin.

Democrats, this is why we are here today taking a stand and handing over this memorandum.

Over the past couple of years there’s been a sharp increase of violent crimes in the Northern Cape, especially here in Kimberley.

Murder has increased by 20%;

Attempted murder by over 116% – the highest in the country;

Rape has increased by almost 10%

This is a crisis.

Today we are not interested in empty words, commissions and task teams.

Two years ago, President Ramaphosa introduced a GBVF Council claiming to tackle the scourge of violence against women.

To this day, nothing has been done.

I have this message for him:

For every woman that is raped and killed in this country, it is on you, Mr President!

It is on you because you protect a minister who is clearly out of touch and ill-suited for the job.

It is on you because you can fix the broken SAPS; put more boots on the ground and fund crime fighting efforts.

But you do not. Therefore, you are complicit.

If the President and his cabinet are serious about the safety of women in this country, then DNA sample backlogs must be cleared now!

There is nothing to celebrate if women cannot be safe in their homes and in their communities.

That is why the Western Cape Government has the biggest and most comprehensive safety plan in the country – with the largest budget.

Eventually, we want to take policing powers away from national government.

We believe local policing authorities are better at crime prevention and fighting.

And in Parliament the DA introduced a Bill to deal with this very issue of DNA backlogs.

We want to ensure that those who commit these crimes do not become repeat offenders at our expense.

We cannot allow the lives of Uyinene Mrwetyana, Tshegofatso Pule or Nosicelo Mntebeni and many others to have been lost in vain.