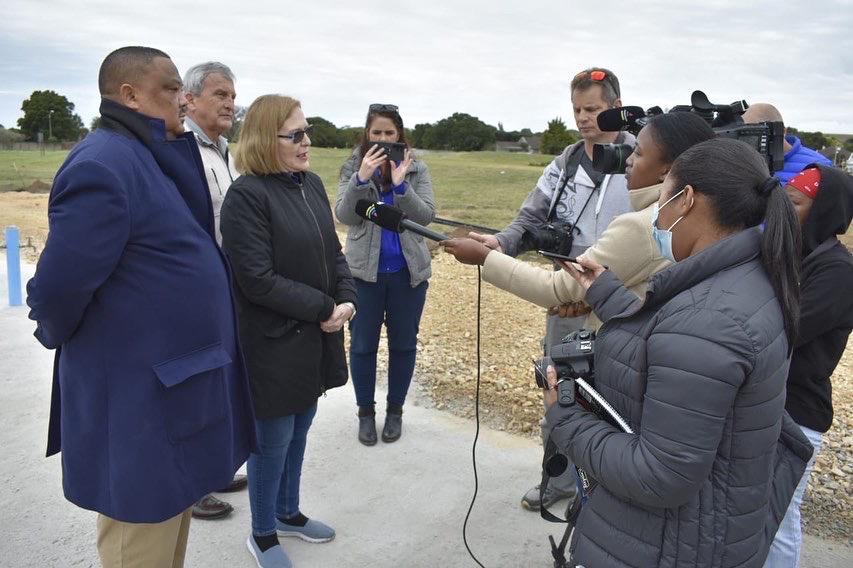 Day Zero is set to hit Nelson Mandela Bay within a matter of days as the second of the Metro’s two main supply dams is running dry. The Churchill Dam will in the coming days run out of water, while the Impofu Dam has already been decommissioned.

This will leave 40% of the residents of Nelson Mandela Bay without water leaving them to queue at hastily constructed water collection points to receive their allocation of 50 liters per person per day.

Today, 20 June 2022, I conducted oversight inspections in Port Elizabeth to assess the municipality’s readiness for Day Zero and was very concerned to see the state of communal taps at a water collection point in Buffelsfontein Road.

There are only 48 communal taps – a clear indication that there has been minimal logistics planning.  It is difficult to foresee how thousands of residents will manage to be serviced at this site. It is a recipe for conflict and chaos. (see pictures here and here)

I also conducted an oversight inspection to the Churchill pipeline near Schoenmakerskop, where it was clear that leakages have been a problem. (see pictures here and here)

This looming humanitarian crisis could have been avoided if it wasn’t for the inability of the ANC-led coalition government to plan  for this disaster and lead the City through it.

In the 2018/19 financial year, while the DA-led coalition was in government, we secured R750 million in long-term loan funding of which most was earmarked for water infrastructure projects. This funding was to be used to expedite the integration of the City’s water infrastructure with the Nooitgedacht Low-Level Scheme.

Under the ANC, many of these projects were never completed, or even got off the ground.

We need to establish the state of all planned projects to integrate the system. The Metro has been unable to come clean as to which of these projects have been completed, are still in the planning phase, or have even fallen by the wayside due to insufficient budget.

The DA will now launch a Promotion of Access to Information Act (PAIA) application to force the Metro to provide this information.

We will also submit an urgent motion to council for the establishment of a Section 79 committee that will run parallel to the disaster management team. This committee will be able to monitor the municipality’s performance in managing the water crisis on a daily basis and make recommendations to council. This committee must consist of civil society, business people, water engineers and experts, and councillors.

You need coordination in a state of disaster. Everyone must be on the same page and be willing to work together. Everybody must know what their role is.

The DA will do all it can to assist residents during this unprecedented drought, drawing from the best practice that our governments have already shown in drought disaster management.