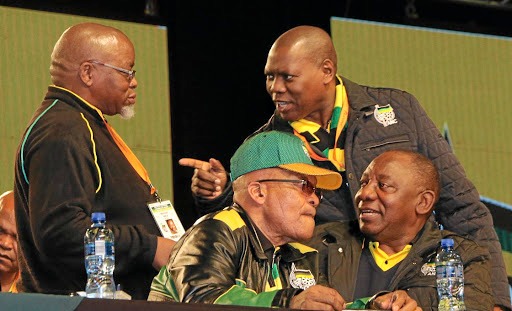 The latest instalment of the Zondo Commission report lays out in clear details how criminal collusion within the ANC, Cabinet, ANC deployees and the Guptas conspired to capture Eskom and reduce it to a shell, with consequences that are being felt to this day through unrelenting waves of loadshedding.

Evidence from the report exposed how the Guptas, working in cahoots with former President, Jacob Zuma, the then Minister of Public Enterprises, Lynn Brown, and ANC deployees at SOEs worked together to remove Eskom executives and ‘…install persons as members of the Eskom board of directors who would facilitate or at least not oppose the Guptas’ state capture scheme and appointed Eskom executives who would co-operate with the Guptas’.

In a scathing attack on the ANC’s criminal destruction of Eskom, the Commission stated that:

‘…The ANC and the ANC Government should be ashamed that this happened under their watch. The question that the people of South Africa are entitled to ask is: where was the ANC as the Guptas took control of important SOEs such as Transnet, Eskom and Denel? Where were they? What were they doing? Were they aware of everything and lacked the courage to stop President Zuma and his friends, the Guptas, in what they were doing? Were they looking the other way?’

This is a serious indictment on President Cyril Ramaphosa and members of his Cabinet, some of whom sat in the previous administration’s Cabinet, for supposedly turning a blind eye while the country was being robbed blind by the Guptas, with Zuma as the mafia boss. Their often repeated claim that they did not know what was happening is dishonest. The Commission report ask the important question, ‘How was Eskom such an important state owned entity – allowed to be captured like this under their (Cabinet) watch?’

Findings made in today’s report re-affirm the DA’s call that all those who have been implicated in state capture should be criminally charged for corruption and acts of sabotage against the state. Crippling Eskom through state capture is costing the economy through lost productivity and jobs that could have been created had there been a regular supply of electricity.

Despite the clear evidence of criminal conspiracy outlined in Zondo reports, the DA is not holding its breath. From the Zondo Dashboard Tracker launched by the DA on 25 Apr 2022, 1438 people have so far been implicated in state capture but no one has been held accountable for the part that they played in stealing from South Africans.

Still, this will not stop the DA from ensuring that all the implicated parties in state capture have their day in court. It is for this reason that we have written to the Chairperson of the Portfolio Committee on Justice and Correctional Services to request that the NPA is brought before it to account for its lack of prosecutions to date.

The Zondo Commission has today confirmed that the ANC is not fit to govern as it has essentially degenerated into a criminal enterprise. South Africans will not accept more empty platitudes on fighting corruption. What the country needs is active prosecutorial action against the architects of State capture.