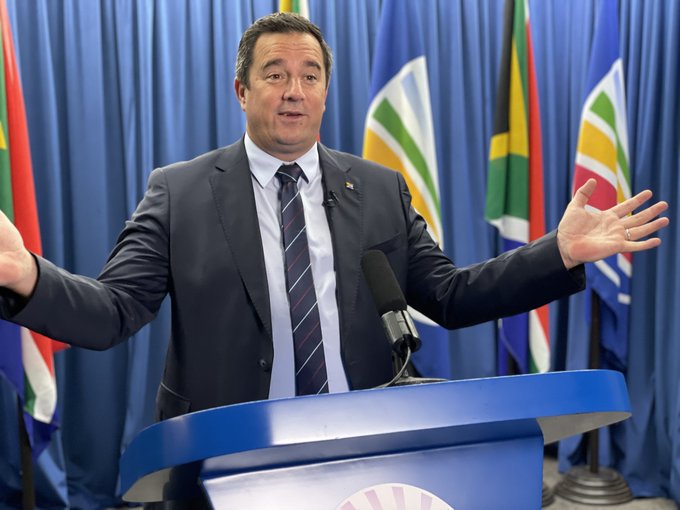 The following address to the nation was delivered today in Cape Town by the DA Federal Leader, John Steenhuisen MP.

As you may know, on Wednesday Parliament debated and voted on a Motion of No Confidence in the entire Cabinet – a motion which I tabled on behalf of the DA last month.

We brought this motion because every single member of this ANC cabinet is directly responsible for the dismal state of our economy and the failure to provide services, safety and dignity to our citizens. Their incompetence, indifference and corruption has brought suffering to millions of South Africans who cannot find work and who live an incredibly hard life of poverty and despair. Yet not one of these ministers is ever held accountable by the president who appointed them.

Our Members of Parliament swore an oath to serve the people of South Africa, and it is our duty as official opposition to hold government to account. Even when we know the numbers are stacked against us and the chances of ANC MPs suddenly discovering their conscience and doing the right thing are slim.

We owe it to all South Africans – and not just those who voted for the DA – to do everything we can to hold government to account. This means using every mechanism available to us – in Parliament, in provincial legislatures, in municipal councils, in court and through the media. That’s our job.

Our motion on Wednesday did not pass – it was ultimately defeated by 231 votes to 131 votes, with one abstention. This is mainly due to the majority the ANC still has – for now – in the National Assembly. A majority it has consistently wielded in the past to shield its members, its ministers and its presidents from accountability.

Throughout Jacob Zuma’s term of office, this ANC majority in Parliament was deployed no less than six times to protect him from consequences for his criminality – in five Motions of No Confidence and one impeachment vote. Aside from the very last Motion of No Confidence, when the writing was already on the wall for him and a small number of ANC MPs felt emboldened to vote against him, the ANC has always provided a single, unified cover for its errant members and leaders.

At the end of the Zuma years, no ANC MP wanted to talk about all those times they locked arms with their votes in Parliament to shield a man whom they all knew was a criminal. Many of them have subsequently tried to airbrush their part in protecting Zuma from history. But that won’t work. Their names are recorded alongside their votes. They will forever carry the shame.

And on Wednesday they did it again. Every single ANC MP answered out loud that they have full confidence in the ANC cabinet, despite a mountain of objective evidence and independent reports that point to the catastrophic failures and brazen criminality of ministers in this cabinet. Many of them laughed and cheered as they protected the looters and destroyers in their ranks. One day they will again try to erase this shameful vote from history, but they won’t succeed.

While this motion did not pass, it did succeed in publicly separating those elected public servants who serve their country from those who serve only their party. And that doesn’t only include ANC MPs. The other benefit of a vote like this is that you get to see all the little proxy parties of the ANC, stripped bare and exposed. Parties like GOOD, the NFP and Al-Jammah all sang loudly for their supper alongside their mother party.

These are the things all South Africans need to know: Who is fighting in their corner, and who is shielding the corrupt and the inept?

We may have lost this vote, but we certainly won the argument.

And while we didn’t have the numbers in the House, I know that outside of Parliament the support for firing this cabinet is huge. Thousands of people signed our petition and we’ve received encouragement from all sectors of society.

This bodes well for the next big vote of no confidence which takes place in 2024 – a vote every single South African 18 years or older will have a say in. And in that vote there is very little that 231 ANC or ANC-aligned MPs can do to hold back justice and accountability.

I want to thank every South African who supported us in the build-up to Wednesday’s vote. This was an important battle in a war we will ultimately win. With your continued support we will free South Africa from this failed government and set our country on a new path to prosperity. And this will happen sooner than you may think.