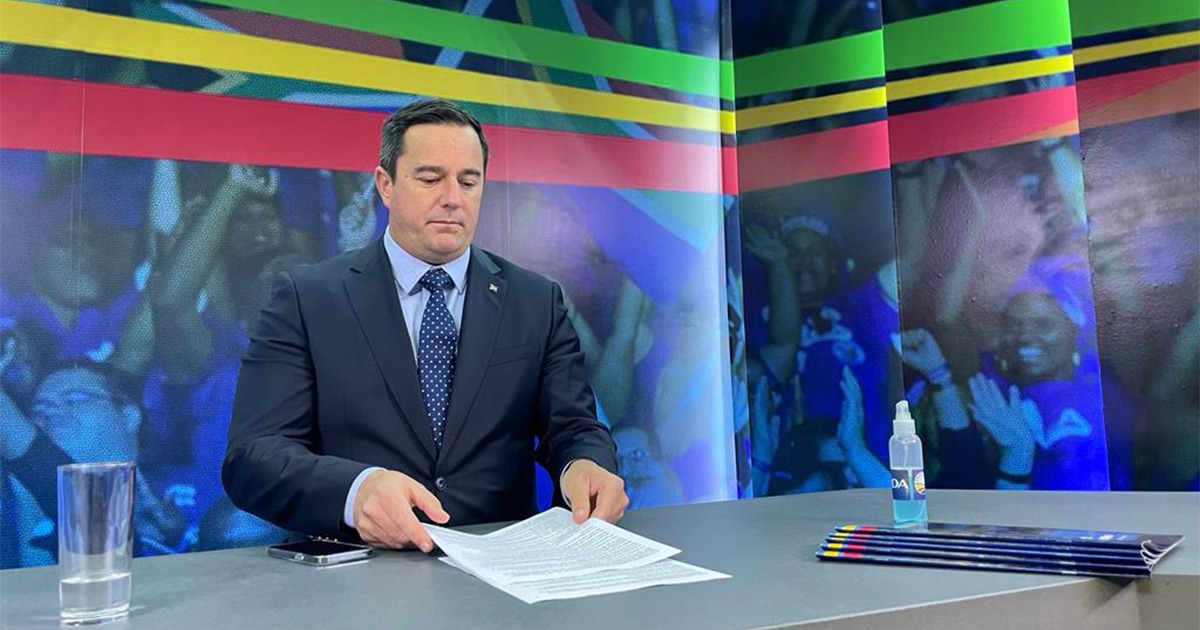 The following address was delivered today by the Federal Leader of the Democratic Alliance, John Steenhuisen MP, in Cape Town.

Yesterday’s developments in the votes for Mayor and Speaker in both Johannesburg and Ekurhuleni Metros came as a surprise to everyone, including us at the DA. We didn’t ask for help from the EFF to lead these governments, and we did not expect to leave these meetings with two new DA mayors, and both these metros’ first ever female mayors.

But the election of Dr Mpho Phalatse and Tania Campbell, as the new mayors of Johannesburg and Ekurhuleni respectively, signifies an incredible opportunity for these metros. I know both these women well, and I can vouch for their character, their commitment and their willingness to do whatever it takes to put the interests of the people first.

Their first priority will be to ensure stability in these governments and work at solidifying coalitions with parties that share our governing principles and our commitment to the people. If we can get this right, today could be the start of a bright new chapter for these cities that are crying out for stable governance and better leadership. I give the residents of Johannesburg and Ekurhuleni my word that as long as they have a DA-led government in charge of their metro, we will always seek to act in their best interest and do all we can to make their city a better place to live in.

I want to reassure residents that there will be absolutely no compromise on our principles in order to stay in government. We are here to honour our pre-election commitment of governing well. We are certainly not here to cling to power at all cost and would sooner return to the opposition benches than give way to demands that are unrealistic, corrupt or require us to govern badly.

I also want to make it clear that we did not solicit the support of the EFF – or Action SA, for that matter – for our candidates in these metros. There was no deal made with them, and there is no quid pro quo for supporting our candidates. All we offer these parties is the opportunity to be on the right side of history. We will put proposals on the table to end corruption, improve service delivery, and to attract investment to these cities in order to create the jobs that are essential to lifting people out of poverty.

It will be up to them to show whether they are interested in this agenda or not. We look forward to working with any party that shares our vision for fixing these metros, and providing a pathway out of desperate poverty for millions.

But we are under no illusions about the stability of these governments as they now stand. I think it is clear to all that the EFF voted against the ANC more than they voted for the DA. They extracted no concessions from us, and they will get none. What this means is that these governments could very well be short-lived. But whether they last five years or five days, I can assure you that the DA will use its time in office entirely in service of the residents of these metros. That is the only reason we do what we do, and the only reason there ever should be for contesting elections.

All we can do is hold firm on our principles. Which is precisely what we did, throughout the election campaign, throughout the coalition negotiation process, and right up to yesterday’s council votes. We came under tremendous pressure, but we didn’t budge for a minute on these principles, and we made it very clear that we would rather remain in opposition than put ourselves in a compromised situation in unstable or paralysed minority governments.

None of that has changed. The EFF and Action SA’s support for our candidates came with no strings attached, and everyone who voted in support of a DA candidate yesterday knew that we would not allow a gun to be held to our head in this government arrangement.

The crucial threshold that was crossed yesterday was a psychological one. Today the whole of South Africa knows that the ANC can be beaten. We no longer live in a single-party dominated democracy, and that is a watershed moment in our history.

Analysing why various parties chose to vote for our candidates is of less importance than what happens from here on out. Because right now we have a golden opportunity to start correcting the course of these metros – to clean up government, to end corrupt contracts, and to re-prioritise spending in order to deliver better services to poor communities, open more opportunities for poor residents, grow the local economy and inspire hope for these cities’ and our country’s future.

This is a momentous task at the best of times. From the vantage point of a fragile minority government, with a hostile administration, and facing a huge opposition bloc, both in our own councils and in provincial governments, the challenge becomes Herculean.

Add to this depleted budgets, poor revenue collection, infrastructure decay and huge service delivery backlogs, and it should become clear: None of these cities can be turned around overnight, especially if we cannot ensure stability in complex minority coalitions. But the DA has managed difficult coalition governments before and we are up for this challenge. I can also assure you that no DA-led government has ever been afraid of hard work or daunted by long timelines.

As long as we can remain in office and work alongside parties that share our big, optimistic vision for these metros, we will chip away at that mountain of work and start turning Johannesburg and Ekurhuleni – and other cities we may win today – into the caring, inclusive and economically vibrant places we know they can be. But we will also make it known if and when parties deliberately frustrate these efforts, whether this is through interfering with the administration, or thwarting budgets and bylaws. If we cannot pass these crucial votes, we will be vocal about which parties obstructed or frustrated our efforts at good governance.

At the same time we will work hard to make these governments less vulnerable by doing all we can to build majority coalitions that don’t rely on voting support on a case-by-case basis from parties outside a coalition. To do this we will reach out to the parties that haven’t been part of our coalition agreements to date. We will make the case to them that the only way to make progress in these metros, and then protect this progress from the dangers of an unstable minority government, is by building an unassailable majority. Throughout this process, we will keep you informed and make all our agreements public.

Already we have successfully put together coalition governments in various other municipalities across the country, each of which comes with its own unique challenges, which we will have to manage over the next five years. We have also secured outright majorities in municipalities in three provinces other than the Western Cape where we intend to demonstrate that the best possible governing outcome in this country is an outright DA government. And although the situations in Johannesburg and Ekurhuleni are a different ballgame altogether, we also see this as an opportunity to demonstrate what the DA is capable of in government.

These two metros – as well as potentially Tshwane and eThekwini, depending on what happens in their council votes today and tomorrow – now stand before a critical crossroads. The removal of the ANC could not come at a more opportune time, less than three years out from the next national and provincial elections. We have a rare chance now to usher in a new ANC-free era for these metros.

But this will require cooperation and a commitment to selfless service from all parties involved. This is not a game of political chess or checkers, as some have called it. This is about doing what’s right by the people who live in these metros. It’s about responsible, accountable governance that improves lives and restores hope. And that’s never a game to us.