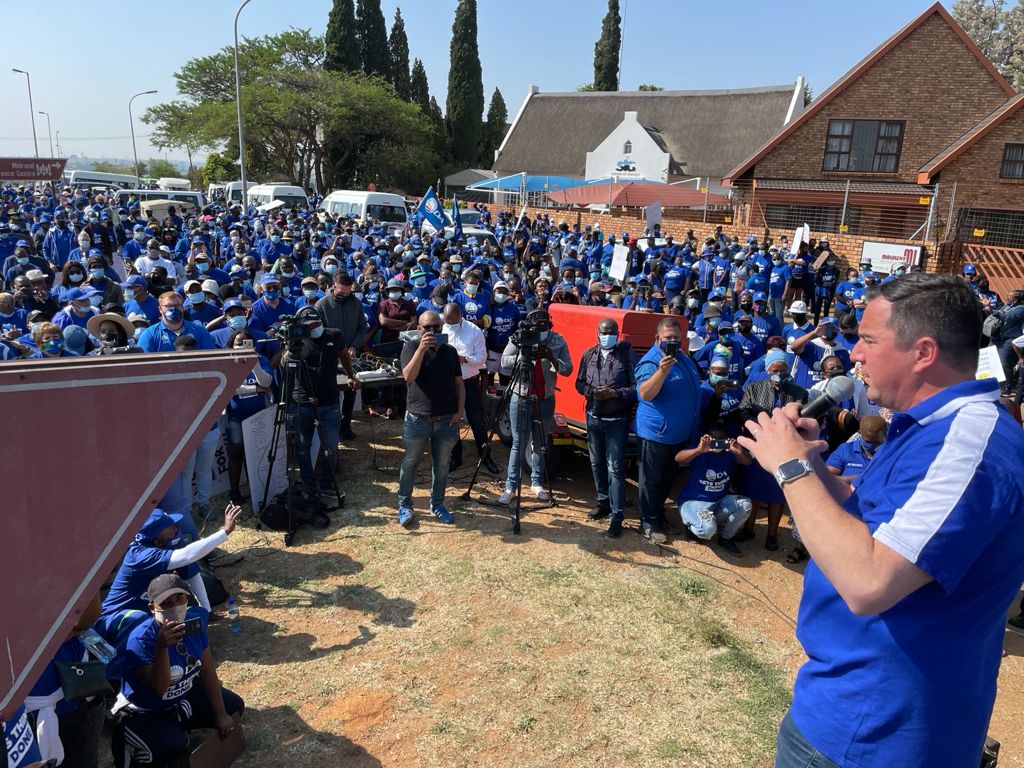 The following speech was delivered by the DA Federal Leader, John Steenhuisen, at Gallagher Convention Centre in Midrand.

Today we are at Gallagher Estate, where the National Minister of Water and Sanitation will be meeting with all Gauteng mayors to discuss Gauteng’s water problems.

Even though the Vaal Dam is over 80% full, Gauteng households and businesses are continuously subjected to water restrictions and water outages, which are becoming more and more frequent across the whole province, and beyond.

Water outages are disastrous for people, for households, for businesses, for jobs, for mines, for industry, and for municipal income.

We are here to highlight the real causes of Gauteng’s water problems. Because a proper solution requires a proper diagnosis of the problem. It is not only incorrect, but self-defeating, to blame the DA council in Tshwane for problems that are province-wide and decades in the making.

There are three main causes of Gauteng’s collapsing water supplies, and all come down to ANC mismanagement.

The first is failures of the ANC national Department of Water and Sanitation, whose responsibility it is to provide bulk water to all the reservoirs of the metros and municipalities in Gauteng. This is compounded by the ANC’s Eskom failures, since pumping and purifying water requires a reliable supply of electricity.

The second cause is that water infrastructure in all three Gauteng metros is crumbling under the weight of two decades of ANC neglect. The major reticulation networks that take water from reservoirs to end users are old and breaking.

The third cause is that the ANC provincial government in Gauteng has done nothing to stop ANC Mayors from destroying local water infrastructure.

Water experts have been warning for years that the ANC’s failure to maintain, replace or upgrade water infrastructure would lead to taps running dry. And now it is happening. And will only get worse over time if voters keep voting the ANC back into government.

Billions of rands that were meant to go to fixing or replacing or upgrading water infrastructure in Gauteng metros and municipalities over the past two decades instead went to feeding the ANC’s patronage network of deployed cadres. The ANC has broken Gauteng and the situation has now become untenable.

Residents need to be realistic. No new council is going to be able to fix this water problem overnight. It is going to take billions of rands and many years to replace old and broken infrastructure. So the sooner voters install an honest local government that spends public money on public infrastructure, the sooner they start securing their water supply.

Where the DA governs, we invest in infrastructure, to ensure sustainable delivery of basic services. Which is why the taps don’t run dry in areas where the DA has been in government for extended periods of time.

When Western Cape dams were at 12%, the DA managed to stop taps running dry. When Gauteng dams are over 80% full, there is water-shedding. Join the dots.

The DA in Tshwane made real progress on replacing old water infrastructure. Before the DA-led council in Tshwane was illegally dissolved and placed under administration by the ANC-run Gauteng Provincial Government, we installed over 600km of new water pipes. We also connected over 12 000 households to water and sewerage networks. The DA gets things done.

Since the DA took back government in November 2020, after winning the court case against the Gauteng Provincial Government, we have repaired over 20 000 water leaks. The DA gets things done. Imagine how much more we could have achieved if we had had 5 uninterrupted years with a full majority.

Securing a municipality’s water supply is not just about replacing infrastructure. It’s also about managing demand until adequate supply is restored. The DA has proved during the once-in-a-century Western Cape drought that we are up to this challenge. In fact, our interventions to avoid Day Zero then are widely considered world best practice. The DA gets things done.

The DA can protect communities from national and provincial water failures because we get the basics right at the local level, the coalface of basic service delivery. But for best results, we need an uninterrupted five years of outright DA administration.

This is why DA-run Midvaal manages to stop taps running dry, even though it is also in Gauteng and also at the mercy of failing ANC national and provincial government. After 19 years of uninterrupted DA government, 19 years of public money spent on the public, Midvaal residents enjoy strong DA protection against ANC failures. The DA gets things done.

And we can do the same for residents of metros and municipalities across Gauteng.