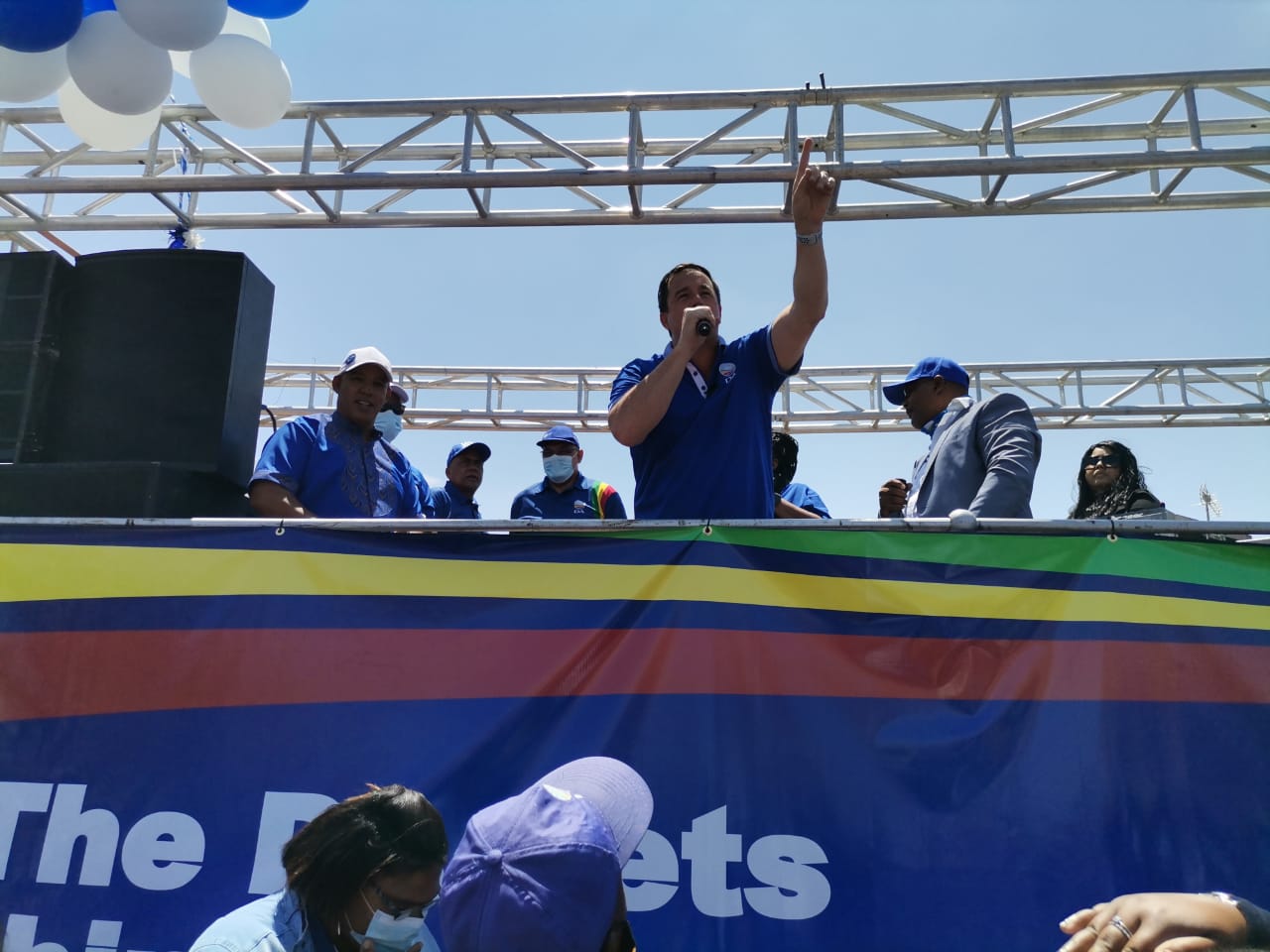 But I’m here today to speak about service delivery. The local government election is, after all, just six days away.

This coming Monday is a hinge of history moment for Sol Plaatje Municipality.

It is the one day every five years that residents get to change the direction the municipality is moving in. The one day that you have your hands on the joystick and can decide whether to take Sol Plaatje up or down.

This decision will impact every day of your lives for the next five years as you go about your daily routine. Opening taps, switching on lights, walking about town, paying your bills, going to the park, seeking employment, driving to work, running your business.

One minute to place your cross. Five years to live with the consequences.

Let’s face it. Sol Plaatje is sliding backwards and has been doing so for many years now.

Kimberley cannot afford another five years of ANC running it (into the ground).

This town looks dirty and neglected and unloved.

Your beautiful Diamond City has lost its sparkle.

Many of your streets are strewn with rubbish. Your Diamond City is becoming a Slum City.

But I suspect water is your biggest problem.

Every Northern Caper knows how precious water is, and how essential it is to every aspect of our lives, be it cooking, cleaning, or running a business.

You’ve already suffered prolonged water cuts, but this is going to get much worse in the coming years.

Sol Plaatje’s water infrastructure is so old and broken that you are losing 60% of your water to leaks.

Sixty percent! And don’t think it can’t get higher. It will if your council fails to replace worn out pipes and valves.

And as water losses grow, so the cost of water will climb.

That is, when there is water available to be sold.

Worse than expensive water, is no water at all. When this happens, the real trouble starts, because then three things happen that spell the end.

One. The municipality goes bankrupt because you can’t charge for what you can’t deliver. As taps dry up, so income dries up. And Sol Plaatje is already deep in debt, owing R320 million to Eskom and R80 million to water boards.

Two. Ratepayers start moving away because it becomes unsanitary and unsafe to stay. This means council has less income to cross-subsidize your poorer households.

Three. Businesses start closing down or moving away, because no business can thrive without a reliable water supply. So jobs dry up along with municipal income.

Residents suffer – especially the poorest – because there is less and less money for service delivery.

Infrastructure suffers because there is less money for maintenance.

And it’s not only the municipality that gets poorer. Property owners get poorer, because nothing falls faster than the value of property when there is no water and when people are moving away.

This is the downward spiral that Kimberly is in.

Next week, you have a once in five years opportunity to stop this downward spiral.

And let’s be clear. The DA is the only party that can secure Kimberley’s clean water supply.

We’re the only party that has proved it can keep the taps running for residents, with a reliable and affordable water supply.

Where we govern, our leak rate is far lower, because we continuously repair and upgrade pipes and other water infrastructure.

Compare Sol Plaatje’s water leak rate of 60% with DA-run Drakenstein and Witzenburg Municipalities which have a leak rate of 17%. Almost four times lower.

When the DA took over Nelson Mandela Bay metro at the end of last year, they tripled the rate of water leak repair from 300 leaks fixed per week then to 900 per week now.

Right now, the Vaal Dam is over 80% full, yet residents of ANC-run Gauteng are suffering frequent water outages. When the DA-run Western Cape dam levels hit 12% during the three-year drought, the taps never ran dry, because the DA worked overtime to augment supply while managing demand.

And don’t for a minute think the DA only delivers to wealthy households.

StatSA’s census of municipalities released in March 2021 reported that the Western Cape delivers free basic water services to 44% of households, double the national average of 22% and the Northern Cape’s average of 20%.

This is what we mean when we say THE DA GETS THINGS DONE.

This is not an empty promise. It’s a statement of fact. And no other party can claim it.

And if you’re not convinced by this argument, then let’s talk about electricity.

Last year, Eskom CEO Andre de Ruyter said that Sol Plaatje had the highest mark-up of electricity in the country, at 84%.

Yet still many residents suffer frequent power outages, over and above Eskom load-shedding.

Compare this to DA-run Cape Town, which protects residents from one level of loadshedding through their hydroelectric scheme, and which has a dedicated metal theft unit to protect residents from electricity outages due to cable theft.

Compare it to Stellenbosch, which is set to become SA’s first municipality to end load-shedding altogether, by buying electricity directly from independent producers.

This is what we mean when we say THE DA GETS THINGS DONE.

And when a council gets things done, it attracts investors and tourists.

Kimberley has a fascinating history and wonderful people. Yet it is not welcoming to investors or tourists.

For example, I’ve just visited Docs Coffee Shop next to the famous old Halfway House Pub. There is a massive hole there, which I am told has been there for ages. It’s ugly and dangerous and growing.

Kimberly should be known for one hole, not many of them.

Some roads are so pot-holed you can hardly drive on them.
Compare this to Tshwane, where the DA-run council filled potholes at an average rate of 83 per day for their first 6 months in office.

And we are very keen to get things done here in Sol Plaatje too.

So when you cast your vote on Monday, remember that ONLY the DA has a proven track record of service delivery, of job-enabling policies, and of corruption-free government.

ONLY the DA has a ward candidate in every single ward in the country, chosen in a thorough selection process.

ONLY the DA has fought to protect Afrikaans as an indigenous language.

ONLY the DA is big enough to beat the ANC and keep the EFF out.

The EFF is the only party to the left of the ANC. So when you vote for a small party or an independent, you split the DA vote not the EFF’s.

This strengthens the ANC and EFF relative to the DA. And the stronger the EFF, the more the radical and racial the ANC becomes.

The most sensible and powerful use of your vote is to consolidate the DA vote.

Believe me, if you aren’t going to vote for them, the ANC wants you to vote anything but DA.

Ward councillors are at the coalface of delivery. Here, voting for smaller parties or independents is particularly beneficial to the ANC.

In Metsimaholo Municipality in the Free State, for example, the ANC won just 34% of the vote but 76% of wards. That’s what happens when you split the opposition.

Democrats, the DA is the smart vote and your best chance of success.

So let’s unite to win.

The DA runs the 5 top-rated municipalities in SA.

The DA runs the top-rated province in SA – the Western Cape.

The DA runs the top-rated municipality in the Eastern Cape – Kouga.

The DA runs the top-rated municipality in the Gauteng – Midvaal.

And if you vote DA on Monday, then in five years’ time, there’s a good chance the DA will run the top-rated municipality in the Northern Cape too – Sol Plaatje!

Only the DA can put the sparkle back into your Diamond City.

This is it for 5 years, democrats. So unite to win!