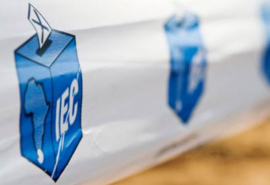 The following speech was delivered by the Leader of the Democratic Alliance, John Steenhuisen, at the Nasrec Expo Centre in Johannesburg where parties gathered to sign a pledge and commit themselves, their parties, candidates and supporters to conducting themselves in accordance with the Electoral Code of Conduct.

But its own conduct also needs policing, to ensure it is the independent institution it must be for elections to be free and fair.

We acknowledge that the IEC is under enormous pressure to deliver to tight timelines and we appreciate the hard work the IEC is doing to adhere to the tight timetable.

But while we support the IEC in its work, we won’t hesitate to call the IEC out when it fails the independence test.

Past generations of South Africans sacrificed greatly for the constitutional right of all South African citizens to vote in free and fair elections.

This requires the IEC to ensure a level playing field for campaigning. No favourites.

There needs to be one set of rules for all parties. These rules are not just the IEC’s code of conduct, but also the lockdown restrictions and the entire South African legal framework.

If the IEC favours some political parties over the others by allowing them to break these rules, then the IEC is failing in its fundamental role to ensure free and fair elections.

And indeed, some parties are breaking the rules and appear to be getting away with it.

In terms of the Political Party Funding Act, the IEC needs to be clear about which parties have refused to report on their large donations, as distinct from those parties which have no large donations to report.

Furthermore, the Act needs to be amended to give the IEC the powers to audit parties.

The EFF is quite clearly spending more than it would be able to do if it weren’t getting large donations. Yet they have failed to disclose any of these donations. Their finances need to be audited.

Party declarations cannot just be taken at face value. We have already seen in this campaign period that some parties are more than willing to break the law.

Both the ANC and EFF’s manifesto launches were in breach of lockdown regulations, which at the time limited outdoor gatherings to 500 people.

Their willingness to break the law puts law-abiding parties such as the DA at a distinct disadvantage.

What action is the IEC taking to protect the fairness of this election in this regard?

It is critical that the IEC takes proactive steps to ensure parties adhere to regulations and are appropriately sanctioned when they do not.

The rule of law is a core operating principles for the DA, and we will continue to abide by all the laws of the land, including those set out in the IEC’s code of conduct.

We call on the IEC to protect SA’s constitutional democracy by ensuring all the other parties do so too.

It’s time to put the I back into IEC.