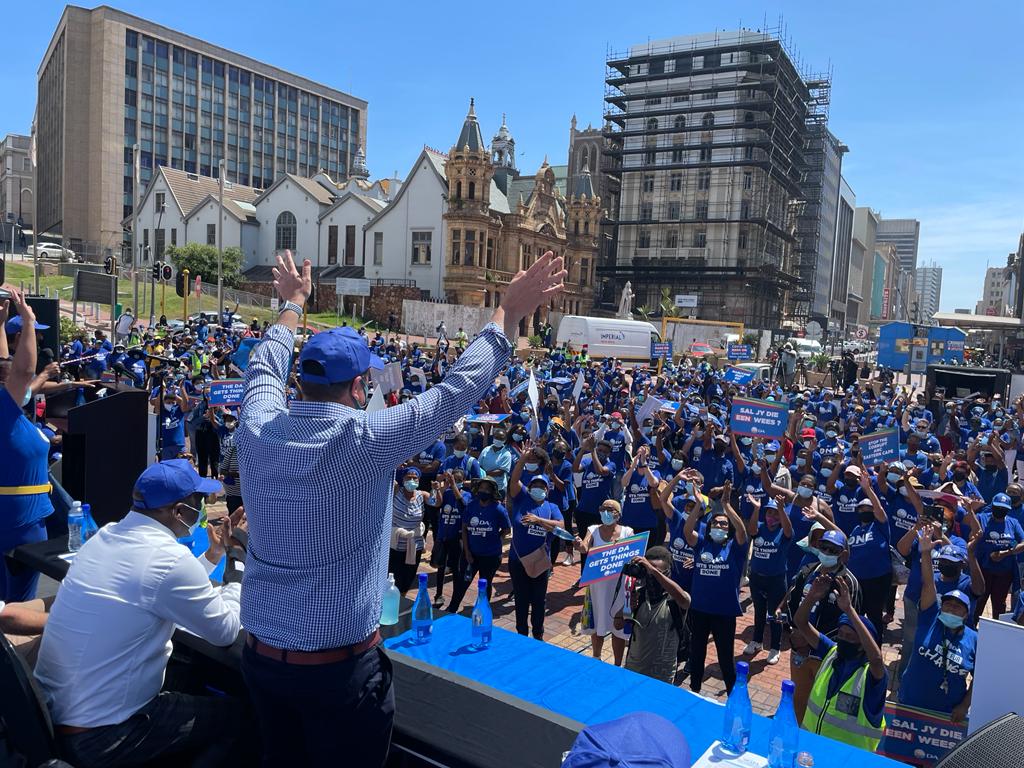 A soundbite from the DA Leader John Steenhuisen is attached here.

Today, the Mayor of Nelson Mandela Bay, Nqaba Bhanga, and I publicly signed a DA pledge in which we confirmed our party’s commitment to good, clean governance and the fight against corruption in the Eastern Cape.

While the entire country continues to suffer the knock-on effects of endless government corruption, the Eastern Cape in particular has had to bear the brunt of the ANC government’s greed.

The latest instance – whereby the Premier of the province, Oscar Mabuyane, along with his former Human Settlements MEC and now head of Public Works, Babalo Madikizela, benefitted from large chunks of the R3.3 million Rand looted from a memorial service fund for the late Winnie Madikizela-Mandela – shows that absolutely nothing is off-limits when it comes to ANC corruption. Some of this money even made its way into the coffers of the provincial ANC itself.

Contrary to what some ANC leaders have tried to claim in the past, corruption is not a victimless crime. In fact, it is the poorest citizens – those who cannot afford to insulate themselves from failed government delivery and who rely entirely on the state for services – who are disproportionately affected by government corruption. It is the poorest of the poor who desperately need their governments – national, provincial and local – to be honest, accountable and committed to perform their sworn duty to the people.

Where the DA governs, we have already demonstrated the clear blue water between our party and the ANC when it comes to clean, accountable governance. And nowhere has this been more evident than right here in Nelson Mandela Bay, where the decrease, increase and then decrease again of corrupt activities in the metro perfectly match the DA taking office in 2016, then being ousted in 2018’s council coup, and then resuming office again in 2020.

By signing this pledge here in the Bay, we are saying to the people of Nelson Mandela Bay: Help us keep the corrupt out for good this time by giving us an outright majority to govern the way only the DA can govern.

As was set out in great detail in Crispian Olver’s 2017 book, How to Steal a City, Nelson Mandela Bay suffered for decades at the hands of a crime syndicate masquerading as its local ANC government. Through crooked tenders, kickbacks and the non-stop theft of public money through local government, this metro was bankrupted and bled dry by the time the ANC was finally kicked out by voters in 2016. The DA immediately set about cancelling corrupt tenders and shoring up the city’s finances, and in under two years turned a R2 billion debt into a R650 million surplus.

However, during the two years in which the metro fell back into the hands of the coalition of corruption, much of these gains were reversed again. And it is clear, from the ongoing scandals engulfing the ANC in the Eastern Cape, that this would be their modus operandi in Nelson Mandela Bay once more, should they ever be allowed back into office. One only need look at stories such as the shameless R10 million “scooter ambulance” project, the R10 million Nelson Mandela Funeral scandal and, slightly further afield, the embarrassing Enoch Mgijima sports stadium that supposedly cost taxpayers in excess of R15 million, to know just how safe public money is in the hands of the ANC in this province.

The Eastern Cape has been brought to its knees by decades of obscene looting by its various ANC governments. The strong correlation between service delivery collapse across scores of municipalities in this province and these same municipalities’ high incidences of corruption and failed municipal audits is proof that government corruption has a very real and immediate effect on citizens. The only way to shield them from this crime is by electing a government that has proven, again and again, that it does not tolerate any form of corruption whatsoever.

Today, by signing this pledge, our message to the people of Nelson Mandela Bay is simple: Keep corruption out of the Bay. Vote DA.