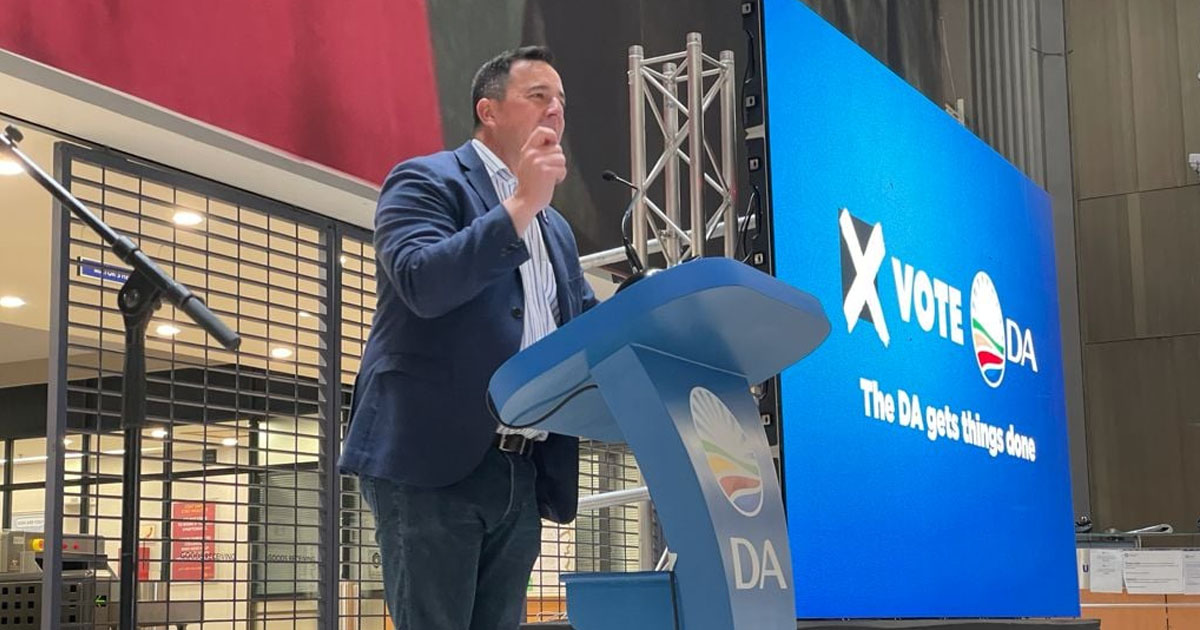 The following speech was delivered by the DA Federal Leader John Steenhuisen at the Cape Town Civic Centre today.

Today, the DA launches our television advertisement ahead of the local government election on 1 November.

I love this advertisement.

I think you are going to love it too.

Because it carries an honest message that no one can argue with.

A punchy message that gets to the heart of our offer to voters.

A message to bring hope to a nation in great need of hope.

This has been the easiest message for the DA to campaign around.

Because it has the essential quality of truth.

This message has united our party like never before. It has silenced our critics and excited our voters.

Unlike other party slogans, this is not a mere promise that may or may not be fulfilled in the future. It is a statement of fact about things we’ve already done for citizens.

And in fact, we go over and above what is expected of us to protect communities from national failure.

You don’t have to take our word for it, we can show you.

We have so many major and minor DA success stories, all of which constitute overwhelming evidence that THE DA GETS THINGS DONE.

The City of Cape Town has achieved international recognition for keeping the taps on during a 100-year drought. The way it protected residents from dry taps is considered best-in-world. And we can do the same thing in other water-stressed municipalities if voters give us a full mandate to govern.

Cape Town also leads in pro-poor delivery, with 40% of households receiving free basic water and sanitation which is double the national average, according to Statistics South Africa.

All DA governments test water to ensure it is drinking water quality.

And DA governments lead in providing residents with access to piped water. They lead in maintaining water infrastructure. And they lead in avoiding water losses.

We are literally vaccinating communities in DA-run areas against national water failures.

We have fought hard for municipalities to be allowed to buy electricity direct from independent power producers.

Now our Energy Relisience Project is putting in place measures to enable 6 pilot DA municipalities to do this. This will protect residents from load-shedding and ultimately end reliance on Eskom altogether. This is the only way forward and the DA is leading the way!

The City of Cape Town already protects residents and businesses from one stage of load-shedding through its well-maintained hydropower station at Steenbras Dam.

And DA-led Drakenstein municipality’s Leliefontien pump-as-turbine station generates clean power using potential energy in their existing infrastructure. This station is the first of its kind in SA!

We are literally vaccinating communities in DA-run areas against national electricity failures.

Need a local government that boosts local law enforcement to protect you because national government is failing in its role?

When the DA came into coalition government in Nelson Mandela Bay Metro in 2016, it established a metro police force with 150 officers, where they had been no local police service at all.

We are literally vaccinating communities in DA-run areas against national policing failures.

Want to get around easily?

DA municipalities lead in road-building, pothole-filling, and general road-maintenance, meaning that people living in DA areas have a much easier time getting around.

And they lead in innovation too. Jeffreys Bay’s multiple award-winning, eco-friendly plastic road shows how we can increase the lifespan of roads and reduce maintenance costs while also combating plastic pollution and climate change.

DA government turned the Cape Town International Convention Centre into an 840-bed Hospital of Hope in just 4 weeks. The DA’s quick action in building field hospitals where we govern means no one has been denied medical assistance in DA areas during this pandemic.

Need a better chance of getting a job?

Once again, THE DA GETS THINGS DONE.

Unemployment is over 15 percentage points lower where the DA governs than elsewhere in the country. That’s a massive difference to people’s ability to provide for themselves and their families.

And this is not a coincidence. It’s because we get the basics right.

The things that households need to function – water, electricity, safe streets, transport – are also the things that businesses need to thrive, so that they can create jobs.

And the DA has a simple formula for getting these things done: we appoint public servants on merit – their ability to deliver to people – and we make sure they spend public money on the public.

A total of 18 of the Western Cape’s 30 municipalities were awarded clean audits last year and they were all governed by the DA!

DA-run Cape Town has delivered 15 unqualified audits in the 15 years we’ve been in government there.

The top five best-run municipalities in the country are all governed by the DA, according to independent Ratings Afrika.

And the best-run metro and best-run province in the country are also DA-run.

This message of actual delivery is a message unique to the DA.

No other party on the ballot paper has a track record of good, clean delivery in government.

The DA is the only party with a record of action and a promise of more.

The only party that can inoculate communities against national failure.

The only party that can stop the death spiral of SA municipalities.

As things get worse under a national ANC government, DA-led provinces and municipalities will be able to protect communities against the worst consequences of state failure.

Failing municipalities are not just running out of money. Crumbling infrastructure means they are running out of the ability to generate an income of their own.

Once services stop, so do payments to municipalities. Local businesses pack up and go elsewhere, taking with them jobs and opportunities for young people.

This is the death spiral that more and more ANC municipalities are stuck in.

Only the DA has shown it can stop this from happening.

By getting the basics right, DA local governments protect communities from state collapse and offer an alternative future.

We are the only party big enough to beat the ANC and keep the EFF out.

And we are the only party trying to unite people of all races around values such a respect for the rule of law and commitment to non-racialism, rather than trying to divide people on the basis of how they look.

But most important for local elections, we are the only party that GETS THINGS DONE.

This is what the local elections on 1 November are all about. Voting for a party that has already demonstrated it can get the basics right.

Nothing else matters, particularly when so many parts of the country are collapsing.

Now is not the time to pick parties that look like you or speak your language.

Now is not the time to split the opposition into so many small parties that can’t get the ANC out.

Now is not the time to pick a single micro-issue and vote for a party only because of that issue.

None of these things will save your town from collapse.

Now is the time to vote for a party that has shown it can protect your town from the worst failures of national government.

Now is the time to vote for the only party that GETS THINGS DONE.

Now is the time to vote DA!