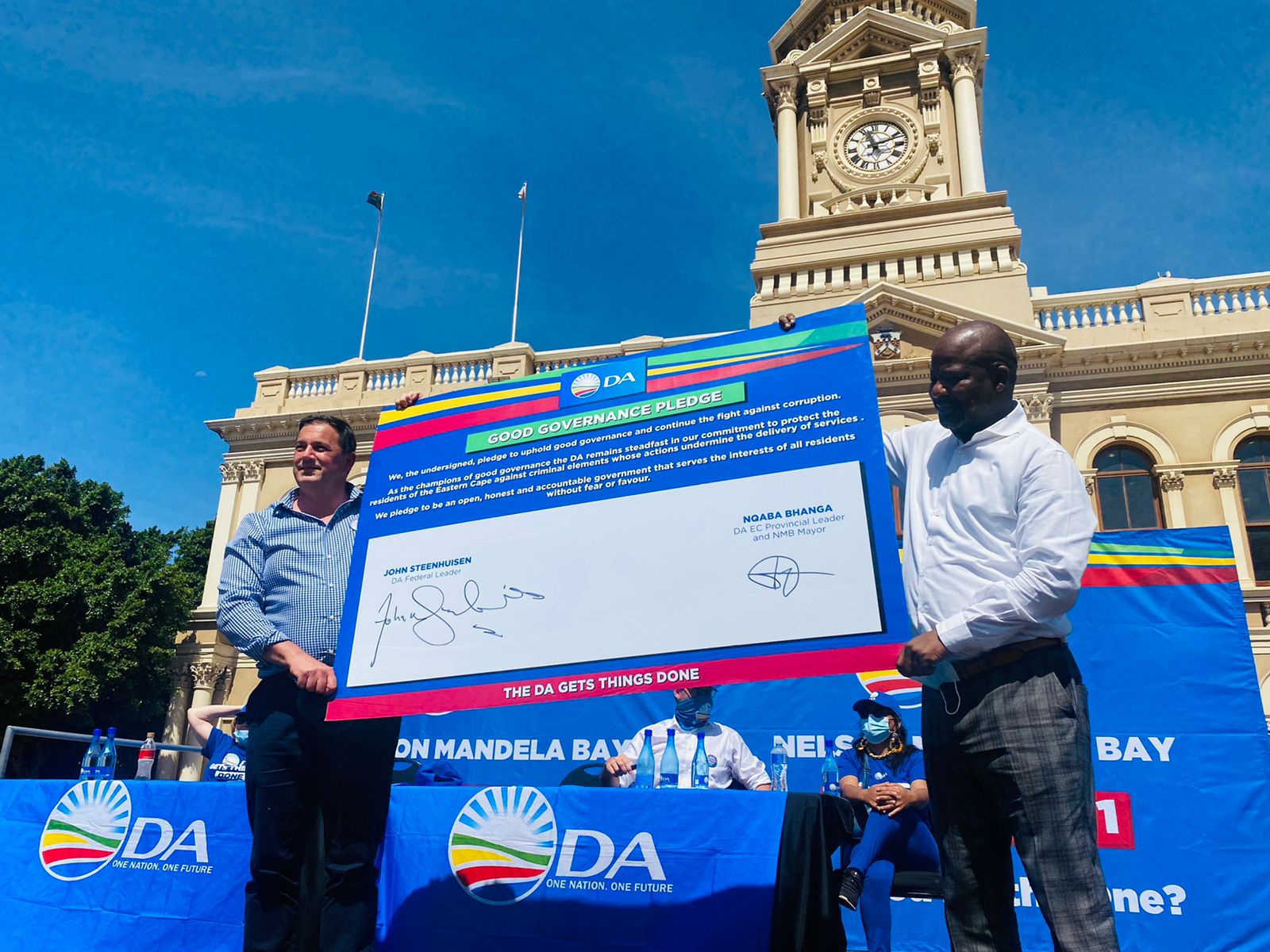 The following speech was delivered during the DA’s anti-corruption protest today.

Today we take a stand against the rampant ANC corruption that has not only brought Nelson Mandela Bay to its knees, but also the whole of the Eastern Cape.

We are pledging to uphold good governance and continue the fight against corruption.  As the champions of good governance, the DA remains steadfast in our commitment to protect the residents of Nelson Mandela Bay against criminal elements whose actions undermine the delivery of services.

This is not just lip-service, because when the DA and its coalitions partners have been in government in NMB, we have been ruthless in taking action against corruption, and when in opposition, we have continuously shone the light on the ANC’s corrupt activities by bringing it to the attention of law enforcement authorities.

After the DA and its coalition partners took over government of NMB in 2016, former DA Mayor Athol Trollip immediately introduced a zero-tolerance stance against corruption by cancelling R615 million worth of corrupt contracts.

The ANC/EFF coalition of corruption wormed their way back into government in August 2018 and for 27 months cadres were given free reign to strip the state coffers bare in order to enrich themselves.

After taking back the government of NMB in December 2020 we immediately set about tackling the corruption that was once again allowed to run riot under the administration of the ANC/EFF coalition of corruption.

We tackled irregularities in the governance of Nelson Mandela Bay to show residents that we are committed to cleaning out the rot.

I made it very clear that, under my leadership, the Nelson Mandela Bay Municipality will hold the administration, municipal officials, and politicians to the highest standard and will not tolerate any impropriety.

This can be seen in the strategic objectives contained in the 2021/22 Integrated Development Plan, which aims to: “Ensure financial prudence and transparent governance and work towards eradicating corruption.”

It is also indicated by the Council’s adoption of the updated Anti-Fraud and Anti-Corruption Strategy and Related Policies earlier this year.

These proactive steps have been backed by action. Since taking office I have referred 16 cases to the municipality’s internal audit.

We have also brought pressure to bear on Internal Audit to finalise the 153 cases that have been pending for years.

These matters range from supply chain management irregularities and irregular expenditure, to abuse of municipal assets and outright fraud. The municipality has also been working closely with various law enforcement agencies, including SAPS, HAWKS, SIU and the Public Protector, on finalising these matters.

The DA will continue to fight this cancer of corruption that is eating away at the lifeblood of this City and will not stop until we have cleaned out all the rot.

The DA and its coalition partners in Nelson Mandela Bay are bringing good corporate governance back to a city that has been plundered for years by the ANC and its partners in crime.

Where the DA governs, we get this done – corruption has no foothold and our governments are not plagued by this scourge.

On 1 November 2021 residents of NMB have the opportunity to vote a DA majority into government and in so doing ensuring that we can forge ahead with our plan of eliminating corruption, adopting best practice in good governance, and ensuring the resilience of communities through effective disaster risk management.

Lastly over the last 48 hours 15 bodies were discovered in the Walmer township.

The DA has repeatedly called for more policing resources for the province and for the Walmer satellite police station to be reopened.

Corruption goes hand-in-hand with chaos and killing. Under the ANC, corruption is rampant and crime is out of control.

ANC cadres have killed each other in competition for tenders.

After the signing of the good governance pledge we will be visiting the satellite police station in Walmer that was closed down.

I will also be writing to Minister Bheki Cele to demand that the satellite police station in Walmer is opened immediately.

Only a DA majority government can take NMB forward again, because the DA gets things done. We need 50% plus 1 – and we are appealing to residents to be the one!