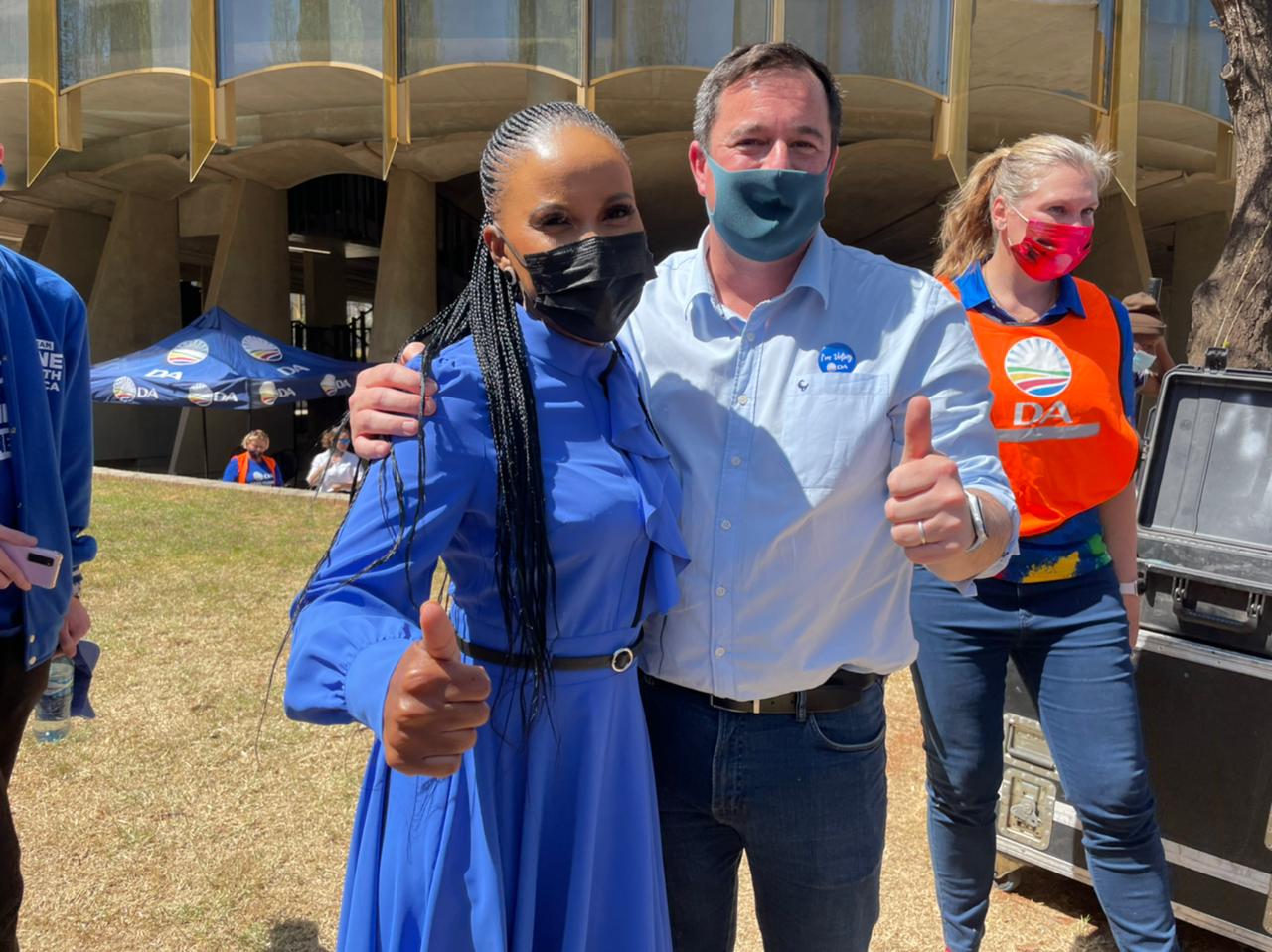 Note to Editors: The following speech was delivered by DA Federal Leader John Steenhuisen at the Johannesburg Mayoral Candidate Launch in Braamfontein.

Joburg is ready to step into a bright new era.

This incredible city – the economic and, many would argue, cultural heartbeat of South Africa – just needs one thing to unlock its brilliant potential. And that is a fit-for-purpose government headed up by committed and ethical leadership.

A government that knows how to look after the needs of its residents – and particularly its most vulnerable citizens – but also how to fling open its doors of business to investors so that the city becomes a place buzzing with industry once more.

Historically, Johannesburg has always been a destination for people seeking opportunities. Throughout its history it has drawn people in from across the country, and the continent, with a promise of a better, exciting future. The city where anything is possible.

But I think we all know Johannesburg has lost some of that shine. Where it once was the beating economic heart of Africa, it has slipped back over the years and other cities have taken its place.

We can see visible signs of this regression all around us – potholes not filled, street lights not working, pavements not mowed, refuse not regularly collected.

These visible signs point to a bigger underlying problem – a government that doesn’t take seriously the contract it signed with the people.

When you don’t take care of the small, everyday things, chances are you’re not looking after the big things either. Safety, water provision, electricity, housing – the things that make a city both liveable and investable.

They have to know that their services will not be interrupted, that the roads and infrastructure around them will be maintained, that their business will be safe and that the local government will do what it can to help them succeed, and not be an obstacle to their success.

Governments that understand this make it their top priority to put all the basic building blocks in place that will attract and support enterprise, and create jobs.

But opening the doors to business represents just one part of the challenge. The other part of a government’s responsibility is towards vulnerable people who require the safety net of a caring government.

This is particularly true in a large and growing metro like Johannesburg.

This kind of environment, with its rapid urbanisation and huge social challenges, requires a particular mindset in government – both business-friendly and empathetic. And that is why today’s mayoral campaign launch here in Johannesburg has me so excited.

I believe, in Mpho Phalatse, Johannesburg has a mayoral candidate that ticks every box.

As a medical doctor, she is undoubtedly smart and accomplished and will run an efficient, hands-on administration here. But she has also proven, through her various roles in public health over the years as well as her time as MMC for Health and Social Development in the metro, that she has the heart to run a caring and humane administration.

All she and her DA colleagues need is enough of your votes. And by enough, I mean a clear mandate that doesn’t put the government at the mercy of those who don’t share this vision of a prosperous and caring city.

We came close last time round in 2016, but because we didn’t have the majority we needed, we had to rely on the support of a party with which we fundamentally disagree on many issues.

But even more importantly, this was a party that did not share the DA’s core values of non-racialism, respect for the Rule of Law, the building of a capable state, and the power of a social market economy to create jobs and opportunities.

We relied on this party’s support to remain in government, and because they knew this, they acted as if they were in charge.

They started making demands that were not aligned with the DA’s idea of good governance, and in some instances the previous DA-led administration gave in to those demands.

In doing so, our party compromised some of its core values, and this reflected in the type of government we were able to offer the people of this city.

I am here to tell you that we’ve learnt a massive lesson from that chapter, and that lesson is this: We will never again take shortcuts and make compromises that jeopardize our party’s values just for the sake of remaining in government.

We would rather be a strong, principled opposition than a compromised, ineffective government. Because the only thing worse than losing an election is winning an election and governing badly.

That is why our fight, over the next seven weeks, is to convince as many Johannesburg residents as we can to give us the strongest possible mandate to govern and bring the DA difference to Johannesburg. And to then judge us by our results after five uninterrupted years.

Five years where we don’t have to constantly battle someone else’s hands on the steering wheel. Five years, after which we can say: This was our best shot at bringing the DA difference.

Democrats, it is not only here in Johannesburg that we learnt valuable lessons about governing in tricky coalitions and partnerships. In Nelson Mandela Bay, after the last elections, we also discovered how important it is to be given a strong mandate to implement your vision.

Our majority there in the coalition government was so slim and so vulnerable that it was always going to be the target of a take-over by the corrupt who used to be in government there.

And so, after two incredibly productive years, the DA-led coalition there was ousted by the coalition of corruption, and every gain made during those two years was reversed.

Today, NMB is back where it was before the DA took over in 2016, and we’re going to have to work hard to fix this again if we get voted back into office there.

Contrast this with what happened in the City of Cape Town after the 2006 elections. There we also entered into a shaky seven-party coalition for our first term, but in the next election the DA managed to win an outright majority, and then an even bigger majority in 2016.

What this meant for the city was three terms, back-to-back, under a DA government. And that is when you start to see the big progress – the long-term plans to unleash the long-term vision.

Today, the City of Cape Town stands head and shoulders above any other metro in the country, on every single criteria, whether it’s clean audits, service delivery stats or the ease of doing business in the city.

Importantly, it is also seen this way by businesses, and this is reflected in both the amount of new investments in the city and the metro’s unemployment rate.

Similarly, here in Gauteng, Midvaal has now had two full terms of uninterrupted DA government, and it now stands as a beacon of good governance and service delivery excellence compared to its ANC-run neighbours.

On the other hand, all the failing municipalities that are under severe financial distress are run by the ANC.

There are so many of them that you can’t even single them out and place them under provincial administration. The only cure for these municipalities is a change of government.

South Africans unhappy with the way their cities and towns are run need to discover the power to fire and hire that comes with every vote.

If you want a city that works, you need to hire a government that works. It’s that simple.

And that is why we have chosen, as our campaign slogan for these 2021 Local Government Elections, a claim that no other party in South Africa can make: The DA gets things done.

When it comes to governing a town or city, that is the only thing that matters. Do things work? Are services delivered? Are broken things fixed?

We have clearly demonstrated, wherever the DA governs, that more things get done.

Now this doesn’t mean we are satisfied with our progress. We know that there are many things we can and must do better, and our governments spend every waking hour trying to improve the lives of citizens.

But objectively, the DA in government is in a different league to every other party. And that is what we want to bring to Johannesburg on the 1st of November.

And in Mayor Mpho Phalatse, I believe they will get the best.

Spend the next seven weeks getting to know her. She’s going to be hitting the streets every day, bringing her offer to Joburg’s many communities. Hear what she has to say and see if this aligns with your idea of a Johannesburg that works.

And if it does, give her and a DA government the mandate it needs to turn this city around.

I believe Mpho is the Mayor Johannesburg has been waiting for.

I believe she has what it takes to lead a government here that will restore Johannesburg to its rightful place as the brightest light in Africa.