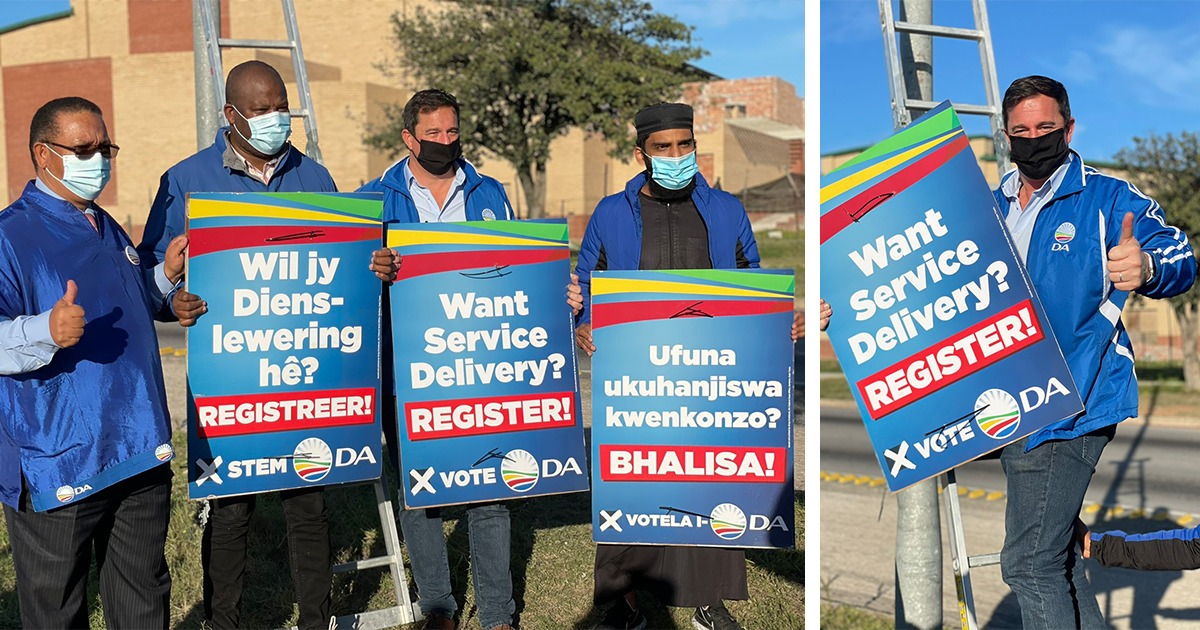 Today, Tuesday 8 June, the DA’s first registration poster for the 2021 Local Government Elections was fixed to a street pole in the Gelvandale in Nelson Mandela Bay.

The DA is ready for these crucial elections on 27 October and our campaign is ready to roll.

Launching our “first poster” is like the “starter’s gun” for the DA. It symbolizes that we have begun the election campaign in earnest.

As always, the DA’s posters will be in multiple South African languages, and I will be joined by Nqaba Banga, the DA Eastern Cape Provincial Leader and NMB Mayor, and Dr Ivan Meyer, the DA Federal Chairperson, to launch our posters in Afrikaans, isiXhosa and English.

From the middle of the week onwards our provincial leaders will be launching DA registration posters, in appropriate languages, in the other eight provinces.

It is critical that all South Africans who will be 18 or older by 27 October, ensure that their names are on the voters’ roll. They can do this on the registration weekend of the 17th and 18th of July, when all polling stations, across the country, will be open for voter registration.

Anyone who has not yet registered, can take their identity document to the nearest polling station on the weekend of 17/18 July, and register to vote in the October 27 elections. You can also use the opportunity to check whether your name is on the roll.

It is very important to remember that in a local government election, voters can only vote at a polling station where they live, which makes registration particularly important for a municipal election.

Please make use of what may be a once-off opportunity to register. So far, the Independent Electoral Commission (IEC) has not yet announced a second registration weekend, so the weekend of the 17/18 July may be your one chance of being able to register easily and properly.

There is no greater power or responsibility in a democracy than voting. It is your voice. The last thing you want to discover, on election day when you want to vote, is that you are not registered and therefore cannot vote.

This is a local election, when people will be voting for those who govern our municipalities. We all know that the majority of municipalities in South Africa are collapsing because of inept and corrupt local government. The voters put these governments in power, and the voters can take them out of power. That is how important your vote is, and that is why every South African over 18 should make sure they can vote by being on the voters’ roll.

Local governments are responsible for basic services, such as water, sewage, potholes, street lights, refuse removal and other things that make life decent and bearable.

Delivering good services is also the way to bring investment and jobs to towns and cities.

And it is also important to remember that the five best-run municipalities in South Africa, are all governed by the DA.

That will be the DA’s message as we take our campaign to voters across the country over the next four and a half months: If you want to fix your town or your city, your vote gives you a chance to keep the DA strong in your town, or to bring DA government to your town. That is why your vote is so important.