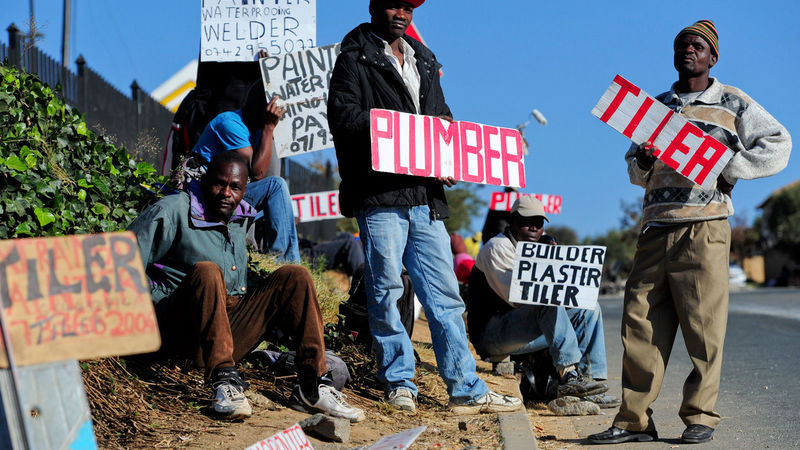 Long-term unemployment, which measures those unemployed for one year or longer, is not a standard headline grabbing figure when quarterly labour force survey results are released. It should be.

The full picture of the crisis of unemployment in South Africa lies in the number of unemployable, not just unemployed, people whose proportion can be partially gauged by the long-term unemployment figures.

This is what we know about the features of those who experience long term unemployment:

– The likelihood of remaining unemployed is greater for the long term unemployed.

– People who have been unemployed for longer than a year become discouraged and stop looking for work. On average the long term unemployed give up looking for work and join the ranks of the economically inactive in greater numbers than they reintegrate back into the job market.

– Long term unemployment strongly and negatively effects psychological well-being, increases social exclusion and propensity to crime. Furthermore, when reemployed those returning after a long period of unemployment tend to earn less than in their previous jobs and are demoted from their past career paths.

Unfortunately, the long term unemployed are not a tiny subset of the unemployed in South Africa, they are a significant majority.

There are several reasons the long term unemployed find it increasingly difficult to secure work: employers are more likely to filter out candidates who have gaps in their work history, especially long recent gaps; long periods of detachment from one’s profession erodes skills and professional networks; money to finance job search costs runs out; and after a long time out of work many spend less and less time looking for work. South Africa with one of the world’s highest proportion of unemployed workers, the majority of whom have been unemployed for a long time, is at risk of becoming one of the most unemployable populations in the world.

A large cohort of the labour force being inexperienced, young, and never employed imposes severe consequences not purely for the individual but for the future of national and regional economies. We are witnessing the erosion of human capital at an alarming scale, which is going to be felt for a very long time to come.

It is not just the young who are at risk. There are also significant consequences for older workers, for whom long term unemployment means they enter retirement inadequately prepared. The long term unemployed are an indicator of the future strain on welfare support for the elderly who were unemployed for most or all of their working lives.

Long term unemployment further exacerbates the risk of jobless growth, should South Africa be able to reverse its economic downturn. Unemployment becomes particularly difficult to address when we are talking about the reintegration of people who have been out of work for many years instead of many months.

These are people who are most likely to be left behind even in the event of an economic upturn. The concern is that a significant proportion of the unemployed are not poised to be able to take advantage of a change in South Africa’s economic fortunes.

In the opposite direction these features of the South African unemployed have an impact on growth; as the combination of low qualifications, low experience and low productivity work together to kill off prospects of growth.

As a result of its impact, there needs to be greater attention and analysis focused on long term unemployment. One could argue it is the most important labour indicator for South Africa right now because it is a measure of the population most vulnerable to never finding employment.

The results of the quarterly labour force survey are one of the most, if not the most, highly anticipated statistical releases in the country. Considering that the long term unemployed constitute the majority of the unemployed we should amass more detail about this demographic. Yet it is typically not mentioned in reporting of the survey results.

We need to regularly track and scrutinise long term unemployment including by province, duration, age, previous sector, education level etc. Another approach developed by the Boston Consulting Group for a pilot in Frankfurt involved more detailed segmentation of the unemployed. In that study segmenting by ability and motivation.

The point is we need to understand more about this cohort, if we are to develop policies which will help absorb the long term unemployed into the labour market. We cannot take it as a given that their reintegration will come about organically if economic output improves. It won’t.

Part of the solutions will likely need to include reducing obstacles in the way of the long-term unemployed finding work. Germany is the only country in the world which excluded the long term unemployed from minimum wage prescriptions it introduced in 2015. The results of that are now slowly coming in.

A recent paper by Matthias Umkehrer and Philipp vom Berge found that there has been low take up of the exemption in Germany. The authors note that “long-term unemployment remained disturbingly persistent” in Germany at around 2,4%.

This makes it difficult to know what the effect of minimum wage exemptions for the long term unemployed would be in South Africa, in part because the take up rate by businesses could be higher.

We know South Africa has a large and rising unemployment rate. The release of jobs numbers needs to be accompanied now by analysis and conversation on the nature of the unemployed.

The danger of South African unemployment is not just that it’s rising but that the unemployed are not a fluid cohort- they are trapped. And that view is a shift of perspective in how we think about unemployment, i.e. it’s not just new people entering unemployment.

This better conveys that we are running out of time and that dislodging unemployment becomes more difficult the longer people remain unemployed. Placing a spotlight on the long term unemployed introduces a temporal aspect to the unemployment data, and with it hopefully a sense of urgency.