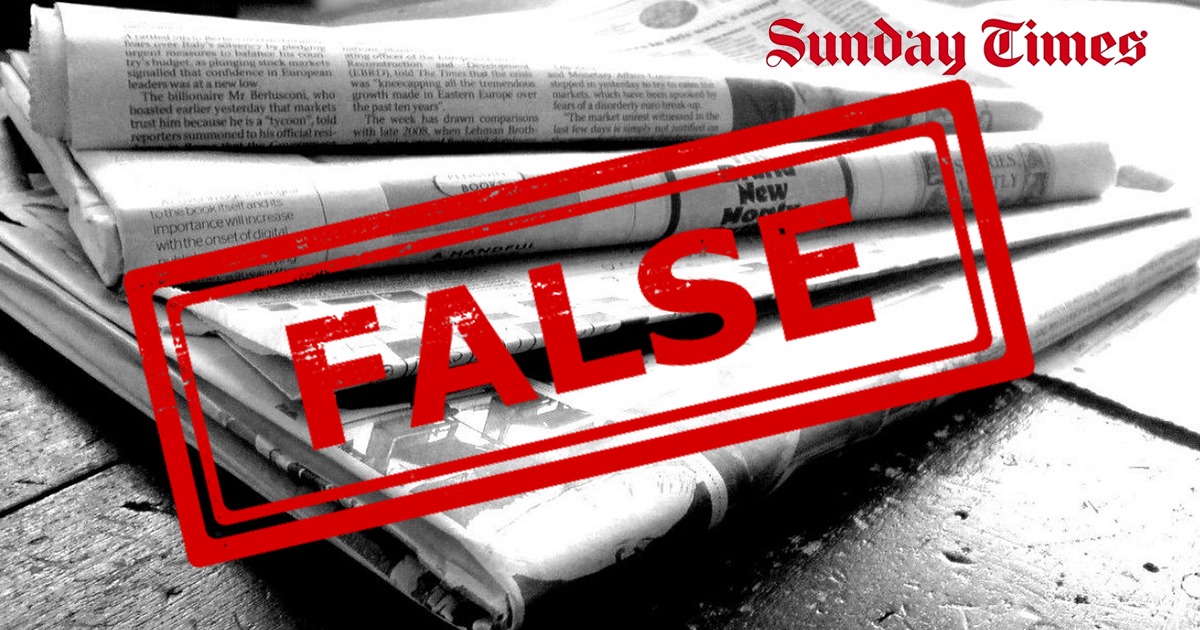 The DA has today filed a complaint with the Press Ombudsman following a Sunday Times article that appeared in the newspaper yesterday (Sunday 28 February). The opening sentence of this article – based on an hour-long interview with DA Federal Leader John Steenhuisen – sought to create the impression that the DA was open to a coalition agreement with the ANC. This was never stated in the interview and is a misrepresentation of the DA’s position on the issue.

Two sentences in particular contributed to this misrepresentation – one was a distortion of what was said, and the other was simply untrue. In the interest of fair and accurate reporting, we have asked the ombudsman to compel the Sunday Times to retract the article and print a correction

The opening sentence of the article claims the following: “DA leader John Steenhuisen has opened the door to a possible coalition with the ANC should there be a stalemate in the 2024 elections – but only if President Cyril Ramaphosa is still its leader.”

That is not what Steenhuisen said to the two interviewers, a full recording of which can be heard above. When he spoke of the possibility of working together with the ANC, he didn’t mention coalitions. He spoke of reaching out to the reformers in the party who are in favour of a pro-growth agenda and seeking their support in backing a reform agenda when tabled in parliament.

He spoke of the need for pro-growth, pro-reform and pro-Constitution people to start talking to each other, and that a strong party at the centre – i.e. the DA – makes a good ally for a reform agenda within the ANC to find backing. That’s not the same as claiming that the DA is willing to enter into coalitions with the ANC, and this needs to be corrected by the Sunday Times.

The other sentence that needs to be corrected states the following: “Steenhuisen’s stance marks a significant departure for the DA, which has long been opposed to any co-operation with the ANC.”

This is simply not true. Not only has the DA under Steenhuisen’s leadership repeatedly extended a hand across the aisle to whichever reformers remain in the ANC, this has also been the consistent position of the previous DA Federal Leader, Mmusi Maimane, who often spoke of building a new majority by co-operating with those in the ANC who share the DA’s values and vision for South Africa.

In the build-up to the 2016 Local Government elections, Maimane said in an interview with the Reuters news agency: “What will be required now is a re-alignment of politics that will in fact mean that people can work together, sometimes across ideological lines to accelerate the project, that very project that you can’t have one party dominance thing, but rather it’s better for us to have a competitive democracy – where people can choose, and power can shift from one party to the next without fear and intimidation.”

The following year, in a speech at Constitutional Hill, Maimane said the following: “We need to put all our energies into saving our country. And I am prepared to work with all parties that share this goal. This includes those good people remaining in the ANC who have been moved by recent events to speak out about what is happening in their party. Today, I extend a hand of friendship to all of them. I want them to know that we are open to working with them in the future, in a new and realigned political landscape.”

This idea of realigning politics to build a new majority around shared values – including reaching out to the reformers in the ruling party – has been a consistent DA message. The claim in the Sunday Times article that the DA has long been opposed to any such co-operation is simply not true and seeks to create the impression that this has somehow changed under Steenhuisen’s leadership. It also needs to be corrected.

From the recording of the interview, it is clear that Steenhuisen’s answers were not accurately reflected in these parts of the article. His answers stated that the DA intends to be the strong party of a new, realigned majority built around shared values. It intends to be the bulwark against the creep of the radical left in the guise of the ANC’s RET faction and the EFF, who have already launched their fightback campaign. It intends to give a voice to the excluded and marginalised, and break the insider/outsider economy. And it has no intention of strengthening one faction of the ANC over the other.

It is unfortunate that a few lines in the Sunday Times article, introduced as clickbait, have been allowed to dilute this message.