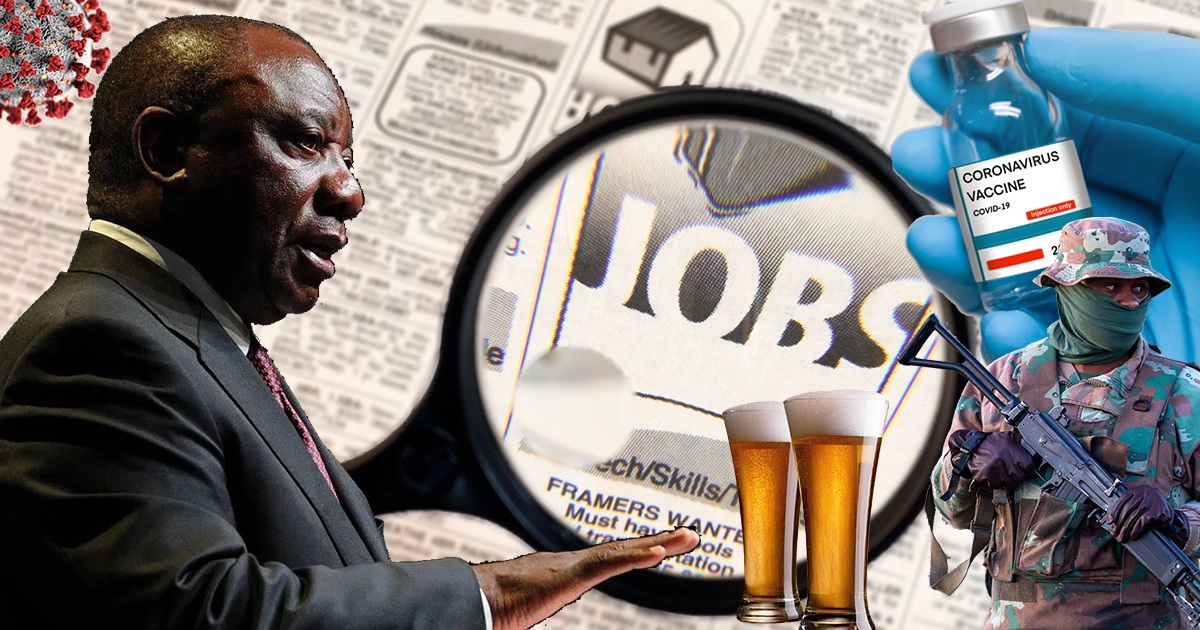 Imposing a restriction on off-site alcohol sales for four days around Easter is not only entirely unscientific, it also places an unnecessary further strain on the livelihoods of those who make their living in this sector. This is the action of a government completely out of ideas and out of touch with the plight of its citizens. A government whose own generous salaries are not affected by its arbitrary decrees.

The first two alcohol bans were directly responsible for 165,000 lost jobs in South Africa. Each of those jobs sustained a household, sometimes more. Over two-thirds of businesses surveyed by Cape Town Tourism had to let staff go. More than 80% had to cut salaries. Our country is in an unprecedented jobs crisis. It is almost unthinkable that our government would turn a blind eye to this and, with the stroke of a pen, impose arbitrary, unscientific restrictions that have nothing to do with fighting Covid-19, and threaten to destroy even more jobs and livelihoods.

You might say: but it’s only four days, and it’s only off-site consumption sales. But it’s four entirely meaningless days. And the only reason we’re seeing this senseless ban is because the things that would actually make a difference are seemingly beyond the abilities of this government. This is just the ANC government trying desperately to look busy. Unable to do the one thing that really matters – procure and administer millions of vaccines – it now feels it has to do something ahead of Easter, even if that something does more harm than good. It has no vaccine plan, it’s no longer trying to build hospital capacity, it doesn’t have the political muscle to get interest groups such as churches to accept tighter restrictions on indoor gatherings, and so it turns to the one ban it knows it can impose and lift at will.

Why alcohol, and why now? Last year, when they introduced alcohol bans, we were told this was to spare hospital beds. Yet very little was done since then to augment hospital capacity in eight of our nine provinces. In the Western Cape, where Covid cases, hospital admissions and deaths are still declining and where multiple temporary Covid hospitals were set up last year, capacity is not an issue at all heading into Easter. Across the Cape Town Metro, Winelands and Southern Cape, Covid bed capacity is now between 15% and 23% and there are hundreds of available beds in the two Hospitals of Hope (Mitchells Plain and Brackengate). So why should an industry already on its knees be threatened by a 4 day alcohol ban? And why 4 days? That too is entirely arbitrary, and indifferent to the damage it causes.

Government claims to follow the science in its decision-making, but then does the exact opposite. A nation-wide alcohol ban irrespective of regional Covid-19 transmission trends, is unscientific and makes a mockery of government’s supposed commitment to data. Last year, when specific regions were experiencing surges in transmission and hospitalisation, government saw fit to implement differentiated lockdown levels for areas such as Nelson Mandela Bay and the Garden Route, while keeping the rest of the country at a lower level. Yet now, with some parts of the country stable and declining – and with the need for economic recovery more urgent than ever – government has seemingly forgotten all about its localised lockdown plan.

The truth is that government has taken this ineffective action to mask the fact that it has failed so spectacularly to vaccinate its people. While other middle-income countries across the world are vaccinating at rates of 70,000 to 150,000 people a day, we are yet to start with our programme. And this is not, as President Ramaphosa repeatedly claims, due to vaccine nationalism or vaccine “apartheid”. Nothing prevented our government from negotiating with vaccine suppliers last year, when everyone else was doing so. The fact that these other countries now have their vaccines and are well underway in their efforts to safeguard their people, and we are not, is the fault of no one but President Ramaphosa and Minister Mkhize.

Let us also not fall for yesterday’s spin that South Africa “will have access to” 30 million Johnson and Johnson vaccines produced at the Aspen facility in the Eastern Cape. Without a confirmed delivery date for a confirmed amount of vaccines, this means absolutely nothing. Just as all the President’s earlier assurances of “vaccines secured” meant nothing when it turned out that these stocks were not available to us. We have already missed our own deadline to vaccinate our healthcare workers by a massive margin, and we are certain to miss our own deadline to vaccinate two-thirds of our population by an even bigger margin. This is an unforgivable failure of government and the President. At some point in the future there is going to be a glut of affordable vaccines available on the global market. Securing the tens of millions we need only then will be another massive failure, which government will no doubt try to claim as a victory.