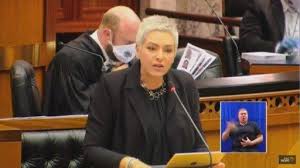 The following speech was delivered today during Parliament’s debate on the State of the Nation Address.

I like to think of myself as a positive person, always seeing the glass half full, even though during the lockdown period, the glass was completely empty, but even I am finding it very difficult to find anything to feel positive about. I am bombarded by stories of death, corruption, poverty, deliberate racial baiting, a failing economy and a barrage of constant lies.

Yesterday, South African learners and teachers went back to school, not a single one of them had even the faintest hope of protection from the Covid virus, never mind the variants because not one was vaccinated. What I find the most disturbing is as I look around me, there are 50 members in the House while the rest of the country is expected to go back to work and school, but Parliament remains in isolation. This is wrong on every level, the Parliament of South Africa must be recalled in full and only those who are in the high risk categories should join virtually. You see, this is what happens when a country enters into a National State of Disaster that it is not designed for and you land up with a Prime Minister and a President and I think we must be honest, Minister Dlamini-Zuma always said she would run the country, and now she is. We aren’t even consulted as a Parliament, the act is just extended at will.

The very minute we realised the hard lockdown was coming and coming fast, DA Leader John Steenhuisen called his Shadow Cabinet together and instructed me to chair the meeting and ensure that every DA Shadow Minister write to their ANC counterpart. We did just that, we offered our complete and unwavering support. Let me list who responded to these letters of goodwill – not one single minister. So much for standing together and what a crying shame.

I’ve thought long and hard this last week about how we can offer more help to the President and how he actually may take us up on the offer. I came to the following conclusion. Those appointing the commissions have a conflict of interest, that is why no one is arrested. Mr President, this includes you too Sir. You were the head of Government Business at the zenith of State Capture, you were the head of the ANC Cadre Deployment Committee overseeing the appointments of Brian Molefe, Matshela Koko, Dudu Myeni etc.

So, what do we do now? We as the DA don’t think that you should establish the National Anti-Corruption Advisory Committee. We think it’s just more talk and even less action. So I say to you, Thuma Mina, send me, I will do it again. Let the opposition sit on a Committee that ensures that those responsible for corruption are brought to book, show that you are the President of the Republic of South Africa, not just the President of the ANC. We have given you too many chances, you have let us down too many times. We don’t believe you anymore. We don’t trust you anymore.

Can we take a moment to appreciate just how bizarre things have become. We now have Nkandla tea parties happening, “pay back the money” has changed to “pass the scones and jam”. We have defunct and none existent faux army structure who purchase uniforms at the local camping co-op threatening the actual President and actual military services should Jacob Zuma be arrested. How absolutely dare they. But no one knows where the powers starts and where it stops.

We have a wannabe Don, running around in dark glasses getting in and out of State Security vehicles saying that the Constitution is not sacrosanct, how absolutely dare him. Let’s get one thing very clear, these are acts of treason, they are threats to the sovereignty of our country, but we have a President who has no power to act against these threats because he has no idea where the power lines start and where they stop.

The most vulnerable of society were lining up, begging for their pittance to just survive for a few weeks, and a loud and cruel Minister, while sitting inside an armored police vehicle instructed the police to open water cannons on them. How absolutely dare she. But nothing thing will be done, because no one knows where the power starts and where is stops.

South Africans can only now say “HOW ABSOLUTELY DARE YOU?”

Ridiculous lockdown laws have decimated local businesses, destroyed the South African economy and left us in mourning for lives and livelihoods. Drive around any city in this country, there are empty shops everywhere, restaurants and hotels have halved their staff, the supply chain has broken. Alcohol and tobacco sales went underground and the black market thrived. Some people loved the prohibition period, lots of tax free money was collected. How absolutely dare you.

My favorite Poet, Dylan Thomas, once wrote:
The hand that signed the paper felled a city
Five sovereign fingers taxed the breath
Doubled the globe of dead and halved a country
These five kings did a king to death

Mr President, you dare be the hand that signs this county to death. The people had hope in you, but I can tell you without a doubt the Ramaphoria is well and truly over. We now know where the power starts and where it stops.