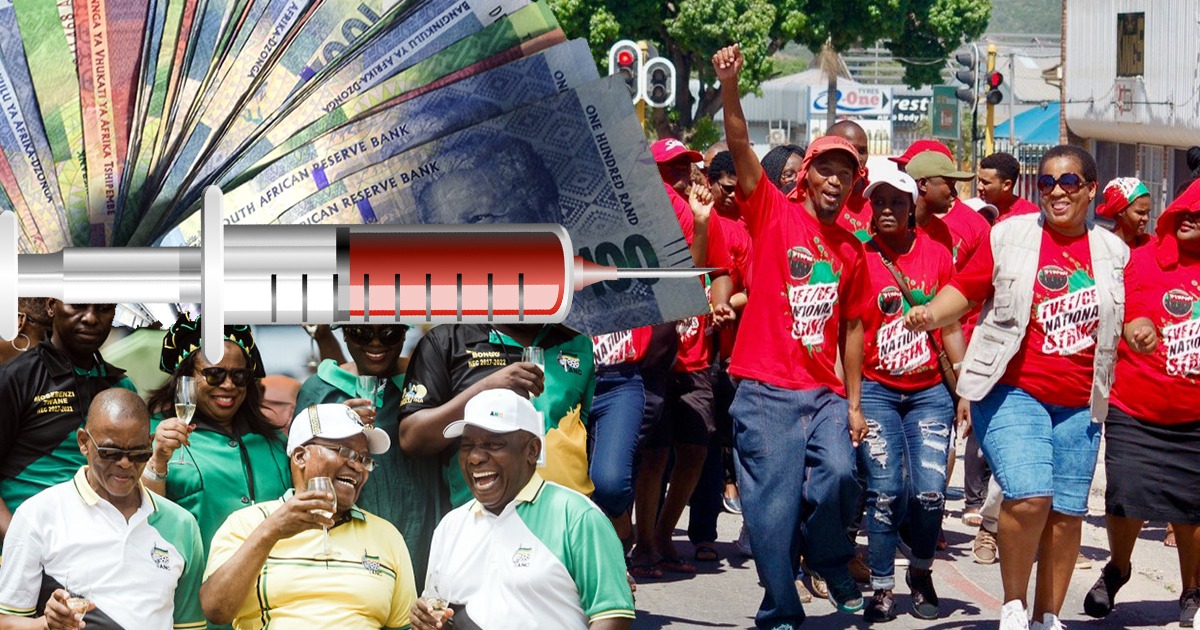 Following recent reports that the ongoing looting of the state means that National Treasury has no money left to pay for life-saving Covid vaccines, it is appalling that some public sector unions are nonetheless demanding that their salaries be increased by as much as 10%. In the current context of profound suffering and rapidly accelerating economic decline, which was engineered by decades of ANC misrule and the government’s heavy-handed lockdown, this demand demonstrates callous disregard for the people of South Africa.

Public sector union leaders appear willing to bankrupt our country as long as they are able to siphon even more money into the pockets of millionaire cadres.

They seem entirely oblivious to the fact that public sector wages have already increased by 66% during the past decade, thereby crowding out funds for productive investment and contributing to the more than 11 million people who are unemployed and the over 30 million people still trapped in desperate poverty.

They appear to simply not care that the state has already lost over R300 billion in tax revenue due to irrational economic fiats issued by their ANC alliance partners.

This demand in the midst of the current crisis has exposed the fundamentally parasitic nature of the ANC elites who have captured the state.

Some of the very same cadres demanding a 10% raise were recently busy destroying our economy through bans on cooked chicken and open-toed shoes while other countries were negotiating to procure life-saving vaccines. The same cadres who demand a 10% increase are simultaneously threatening citizens with even higher taxes after failing to prioritize funds for vaccines over SAA. The same cadres who continue to destroy South Africa’s hospitality and alcohol industries now want to be rewarded with a 10% higher salary.

The Democratic Alliance (DA) will not let them get away with it. We will be writing to Public Service and Administration Minister Senzo Mchunu, asking him to publicly reject this demand and committing to cutting the wage bill during the upcoming negotiations. We will also use the precedent established by the recent ruling of the Labour Court, which declared the previous 2018 wage agreement unlawful. The court noted that:

“Under the present circumstances, it does not appear to be just and equitable to…expend significant and scarce financial resources on employees whose jobs are already secured and salaries have been paid in full, particularly in circumstances where the imperative exists for the recovery of the economy to the benefit of millions of vulnerable people.”

The DA agrees and, if needs be, we will use this same court precedent to defeat this latest attempt by self-serving cadres to bankrupt South Africa.