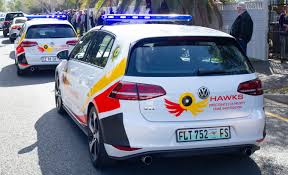 The Democratic Alliance (DA) will write to the National Police Commissioner, General Khehla Sitole, regarding reports of the Hawks’ fleet being grounded as a result of expired license discs due to unpaid fines.

Members of the Hawks in Gauteng have been prevented from conducting investigations due to the license disks on their official vehicles not being renewed because of unpaid fines, some of which date back to 2015.

Critical investigations into, amongst others, fraud and corruption are delayed due to this vital resource restraint and many officers have had to resort to funding their own investigations these past months. This situation is unacceptable and must be solved as a matter of urgency.

General Sitole must intervene immediately and present a report to Parliament’s portfolio committee on police. The Hawks must be enabled to make full use of their resources as soon as possible so that the fight against corruption and other priority crimes continues without delay.

Crime is already spiraling out of control and rising every day as people become more desperate to survive the economic devastation of the continued Covid-19 lockdown and hardened criminals seek to exploit every loophole offered to them.

The Hawks deal with serious priority crimes but are not treated as a priority by an uncaring ANC government.