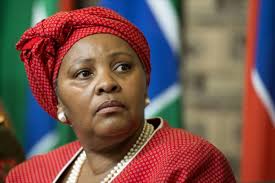 The DA requested that the Minister be summoned to appear before the Committee after she wilfully oversaw the ANC’s abuse of an air force jet to visit Zimbabwe. The DA is of the view that Parliament should play its oversight role on this matter in order to ensure accountability and transparency.

We will, however, not allow for the Minister’s appearance before the Defence Committee to turn into an exercise to exonerate her. Unlike President Cyril Ramaphosa’s slap on the wrist, the Minister should expect a grilling from the DA.

Minister Mapisa-Nqakula must, among other pertinent issues, explain:

This brazen abuse of State resources by the Minister and her party cannot be downplayed. Especially since this was not the Minister’s first time abusing military resources for personal and political ends. She also stands accused of smuggling her late son’s Burudian girlfriend onboard an air force VVIP Jet.

While Minister Mapisa-Nqakula’s appearance before Parliament is a step in the right direction, she should ultimately be fired by the President. Because, in his own words, she “failed to adhere to legal prescripts warranting care in use of [State] resources” and “acted in a way that is inconsistent with [her] position”.