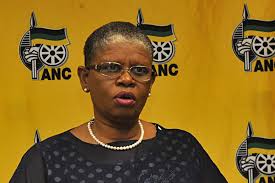 If the suspension on full pay of disgraced former eThekwini Mayor and newly sworn-in member of the KZN Provincial Legislature, Zandile Gumede, is the ANC’s idea of strong, principled action against corruption, then it deserves every derogatory Twitter hashtag directed towards it.

Gumede, who stands accused along with 17 others on charges relating to fraud to the value of more than R200 million, and is currently out on R50,000 bail, retains the full R1.1 million salary she has just been promoted to, while taxpayers will not see a single cent’s benefit for their money. Life, it seems, is indeed one long jolly holiday for the corrupt cadres of the ANC.

Just this week the Department of Public Service and Administration (DPSA) released a report detailing the eye-watering amounts spent paying the salaries of suspended public servants in provincial governments and national government departments. In provincial governments alone the tally to date is R158 million. Between 1 October and 31 December last year, government spent R84 million on precautionary suspension cases, while it spent a further R74 million in the first three months of 2020.

This is clearly unacceptable, and makes a complete mockery of President Ramaphosa’s solemn vows that corruption will no longer be tolerated in his party – a tune he has been singing for years now with no effect at all. If the ANC continues to either redeploy its corrupt politicians – and even promote them, as we’ve seen in Gumede’s case – or simply pay them a full salary to stay at home, then these vows mean nothing.

Furthermore, this suspension of Gumede only followed intense outside pressure, and particularly from the DA in yesterday’s parliamentary Questions to the President session. It had nothing to do with a newly discovered moral compass in the ANC. In fact, the desperate attempts to now row away from the decision to promote Gumede by both the KZN Provincial Executive Committee (PEC) and Luthuli House are almost comical. We now have sources in the PEC saying the deployment instruction came from Luthuli House, and we have ANC Deputy Secretary General Jesse Duarte demanding answers from the PEC.

The truth is that both the PEC and Luthuli House were perfectly happy with Gumede’s appointment, until the pressure came from outside and they had to start putting out fires. At the time of her swearing-in the ANC, through Nhlakanipho Ntombela, assured us that her deployment had the full blessing of Luthuli House and even went as far as claiming it as some sort of victory for the empowerment of women.

It is laughable statements like these that demonstrate just how much disdain the ANC has for the citizens of this country. No one truly believes that promoting an obvious crook up the ranks of the party has anything to do with women’s empowerment, but the ANC think they can get away with even the most outrageous spin and platitudes. The President’s refusal to answer my question to him in Parliament yesterday on where he stands on the Gumede matter is another demonstration of this disdain. It also shows just how sensitive this issue of dealing with the corrupt is to the ANC, because the rot has spread right throughout the party.

I am sure we are now expected to welcome this decision to suspend Zandile Gumede, as if it is some sort of turning point in the fight against corruption. But the DA will never welcome the blatant dodging of real accountability and the continued exploitation of taxpayers for the benefit of cadres who are already multi millionaires. If her mansion and the luxury cars confiscated from the homes of her co-accused by the Hawks and the Asset Forfeiture Unit of the NPA are anything to go by, Gumede will be just fine without her salary.