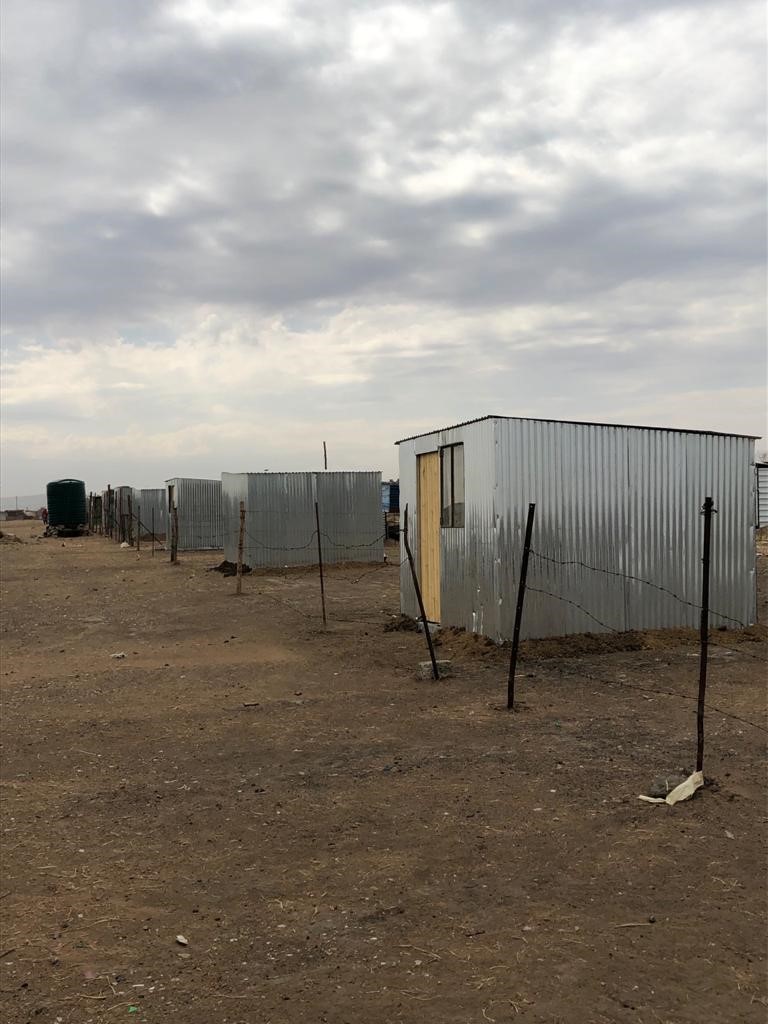 Amid the 26 years of chaotic uncontrolled expansion of the Selahliwe informal settlement at Harrismith, the Free State Department of Human Settlements is now building a vast shanty town consisting of 2,5m X 2,5m corrugated iron shacks, 100m from the local dumping site.

This is allegedly part of the Covid-19 “de-densification” project previously announced by Minister Lindiwe Sisulu.

The moving of families into these hastily constructed tin shacks is an insult to their dignity. There are no roads in the area, with sites pegged out in dusty veld, and raw scraped passages for streets. There is no water reticulation, no electricity and a long-drop toilet in each yard.

Water is delivered by tanker to JoJo tanks in each “street”. These tanks are mounted on a pile of rocks.

According to replies received by the Democratic Alliance (DA) to questions in the Legislature, 885 of these “Temporary Residential Units” are being erected, consisting of a slab of concrete with a 6,25 square meter “lightweight steel space frame with corrugated iron sheeting mounted on the frame”. The area, about 500m from the national N3 highway, is notorious for tornadoes. The extremely flimsy construction of the tin shacks could be an extreme hazard during simmer when the strong winds could result in sheets of corrugated iron flying over the highway.

The Maluti-a-Phofung Local Municipality is awaiting the finalisation of the township register from the Surveyor General. This means that only 247 households will be able to receive title deeds once the conveyancer has been appointed. The other 638 will not receive title deeds now because the township register is not yet opened. These people will receive a “Permission to Occupy” document from the municipality.

According to information we received, a Gauteng based company, Rich Soil Resources was awarded the contract to erect the structures, allegedly at a cost of R22 080 each, which includes the long-drop toilet.

During my oversight visit to the area, a resident complained about the dust, that he had received no documents to certify his occupation of the allocated site but his name had been written in a book, that he had not paid anything to be allocated the site, and that residents had been informed that proper houses would be built with no time frames.

There is a situation of anarchy in the area where a person claiming to be a traditional leader is busy selling ‘sites’, and local councillors are fighting about who should receive houses. It is blatantly clear that the previous populist actions of the Mayor Vusi Tshabalala, when he declared that people can peg sites and occupy the land, despite these sites already having been sold as business premises, has simply made any formalisation of the settlement, or controlled housing development impossible.

It is hard to imagine that the Free State Department of Human Settlements believed that this uprooting of 885 families in the dead of winter, and moving them to a tin shack in a dusty veld, with no services whatsoever, was providing a better life.

It is clear that the ANC government has no idea what they are doing, and are now simply falling around to avoid facing the voters next year with nothing to show.

The DA will continue to investigate this project and contract, and will raise further questions about this matter with the Minister of Water, Sanitation and Human Settlements, Lindiwe Sisulu, in Parliament.