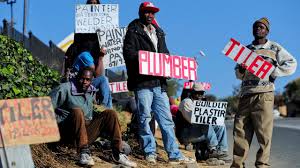 StasSA’s Quarterly Labour Force Survey (QLFS) on Tuesday revealed that youth unemployment stood at a shocking 58.1%, with an expanded rate of 69.5%. This means that more than half of South Africans aged 15 to 24 face joblessness.

South Africa’s economic crisis has deteriorated to the extent that young people, the ones who should be at the forefront of innovation and economic opportunities, languish due to unemployment.

The report estimates that there is around 3.3 million young people who are without jobs in South Africa, more alarming is that unemployment among those aged 25 to 34 is more than double that of people aged 45 to 54.

A number of these young people have attained an education, attended internship programmes, volunteered for work, and have put together good résumés, only to find themselves facing insurmountable unemployment challenges, for which Government has no answer.

The ANC Government is incapable of creating an economic environment that is conducive for job creation. Instead, Government senselessly squanders public money on bailing out failing parastatals instead of adequately equipping young people with skills and fixing the economy. This affirms that young people still find themselves fighting for their dignity, livelihoods and survival. It is evident that we are being forced into a dark abyss of injustice. Young people are in a continuous state of hopelessness and have stripped off their dignity.

Government, both local and national, must ensure that job creation and youth empowerment is at the forefront of their agenda. Like in DA-led governments, a clear plan to rescue this country and create much needed jobs are needed.

The youth must refuse to continue being subjected to a life of poverty and shame.

Where the DA governs, job creation takes centre stage – our governments continue to ensure that:

The DA has and continues to fight tirelessly where we are in opposition to put forward alternative plans to alleviate joblessness and poverty. Our duty is to take this responsibility, own it and see this dream realised together. The DA Youth will follow the President’s State of the Nation closely.