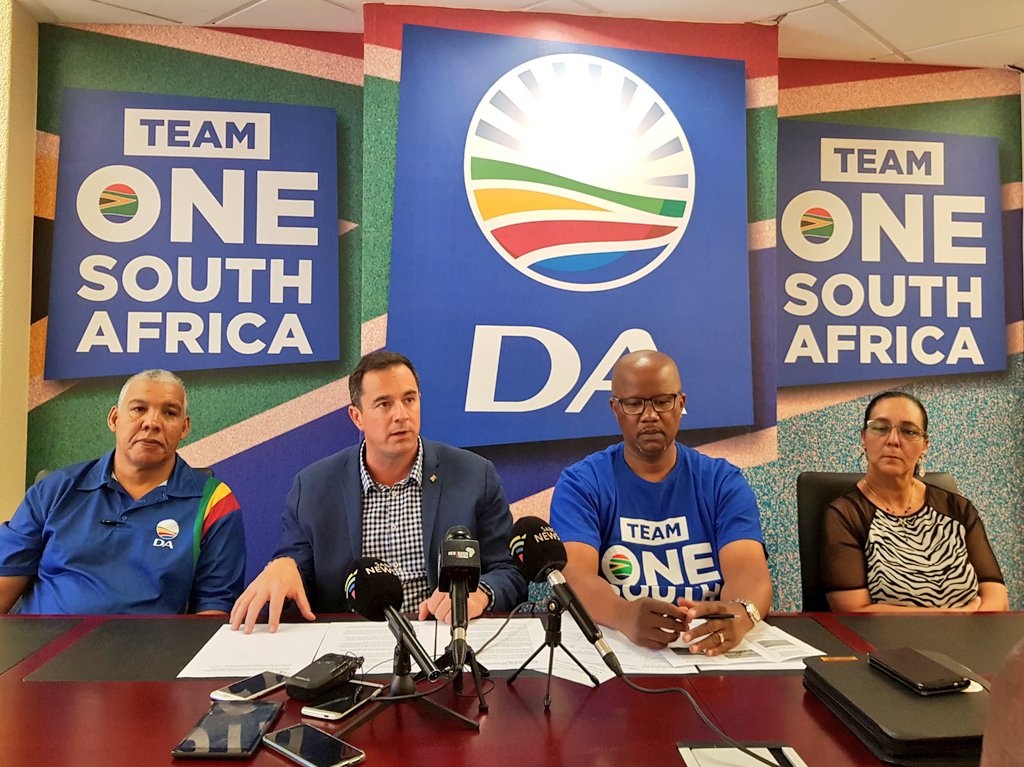 Failure to recognise the severity of the drought that has gripped all nine of our provinces – and any further delays in putting in place measures to mitigate the impact of this threat – will have catastrophic consequences for our nation. This is the stark reality that our government can no longer ignore, and which surely has to be addressed in the President’s January 8 statement on Saturday.

This drought isn’t something far away that affects someone else. The impact on our nation’s food security is an issue that will touch each and every South African, and as always it will be poor and destitute South Africans who will be left reeling as food scarcity and imports cause prices to soar. Our thoughts are with all residents and farmers affected throughout South Africa. I assure you we will do all we can to assist you.

Nowhere is this looming catastrophe more evident than right here in the Northern Cape, and it is perhaps a blessing in disguise that the ANC has chosen to host its birthday celebration here. President Ramaphosa has now been in the Northern Cape for the better part of a week and would have seen first-hand the devastation caused by the ongoing drought. He cannot later claim to be shocked by this situation.

There is nothing we, or anyone, can do to make it rain, but there is plenty one can do to try and lessen the impact of the drought on residents and to protect food security in the agriculture sector. Poor planning, crumbling infrastructure, and rampant corruption greatly exacerbate the effects of the drought, and it goes without saying that these issues need to be addressed in every province.

If there’s one thing that we in the DA know too well, it’s that the climate can wreak havoc with your plans and commitments to deliver to the people. Three years of crippling drought brought the Western Cape, and the City of Cape Town in particular, right to the edge of what we called Day Zero – the day when the taps would run dry. It was only through a massive effort that involved both local and provincial government, as well as business, civil society and, above all, ordinary residents, that this day was avoided.

Cape Town’s handling of its drought response is today widely hailed as a textbook case in how to manage precious water resources. One of the reasons it received so much media attention – both good and bad – was because the City spent so much time updating residents on the details of the situation, sharing information on the proposed solutions and imploring people to save every last drop of water.

While Cape Town’s residents managed to avoid Day Zero, the drought in the Western Cape is far from over. Parts of the Karoo, the West Coast and the Overberg are still in danger, but at least there is a plan in place – a plan that includes infrastructure repair, maintenance and upgrades, rainwater harvesting, alien vegetation clearing and the adoption of a Smart Agriculture Plan. An important part of this plan was also the release of R50 million in drought relief funding by triggering Section 25 of the Public Finance Management Act (PFMA).

It is extremely worrying that none of the other provinces affected by this drought seem to share this sense of urgency and concern. The Northern Cape may be the worst hit, but the Eastern Cape, the North-West Province, Limpopo, Mpumalanga, the Free State, KwaZulu-Natal and Gauteng are all facing their own versions of Day Zero, whether in residential areas or in sustaining live stock and crops on farms.

In towns like Butterworth in the Eastern Cape, Day Zero has already arrived, but there is hardly an outcry in the media beyond the town. And many other Eastern Cape and Free State towns are not far behind. Here in the Northern Cape, agriculture is on its knees. And while measures such as the Drought Plan, the early warning system and plans for a fodder bank that have been launched here must be lauded, it is simply not enough.

President Ramaphosa is here in the Northern Cape, and he will be addressing a national audience on Saturday. I appeal to him to use the opportunity to recognise the urgency of the situation, and to prioritise an adequate response.

The most important action is to direct funds towards drought relief measures. Each province has its own unique challenges brought about by the drought, but common to all is a shortage of funds to implement meaningful mitigation plans. Finance Minister Tito Mboweni will have an opportunity in his upcoming Budget Speech to address this, but each province can also redirect their own funds through Section 25 of the PFMA. If the Premiers of affected provinces won’t do so themselves, then it falls to President Ramaphosa to step in and compel them to do so.

I would also like to reiterate the call we made in October last year to COGTA Minister Nkosazana Dlamini-Zuma to declare the drought a national disaster. National government has a duty to step in where provincial and local governments do not have sufficient capacity or funds to look after citizens in times of hardship. This is such a time, and it is unconscionable for national government to turn a blind eye to the suffering of the people and a potential food security crisis.

Equally unconscionable is the allegation that Human Settlements, Water & Sanitation Minister Lindiwe Sisulu has been using millions of Rands of taxpayers’ money to fund her own campaign for ANC Deputy President in 2022. If this is indeed the case, then the President has no choice but to deal swiftly and firmly with her. At a time when our country is buckling under one of the worst droughts in memory, we cannot afford to have precious public funds squandered on the personal election campaigns of ANC ministers.

It is estimated that over 37% of rural communities in South Africa are affected by the drought. An AgriSA study at the beginning of last year found that around 30,000 farm workers had already lost their jobs due to the drought. That number has no doubt climbed since then. We have to act, and we have to act now. This is not a matter of finger pointing and blaming. It is a matter of working together to ensure that whatever can be done, is done to protect South Africans from the impact of this drought.

Let us stand together in tackling the drought crisis. We have shown in Cape Town that it is possible. Now let’s do the same for the rest of the country.