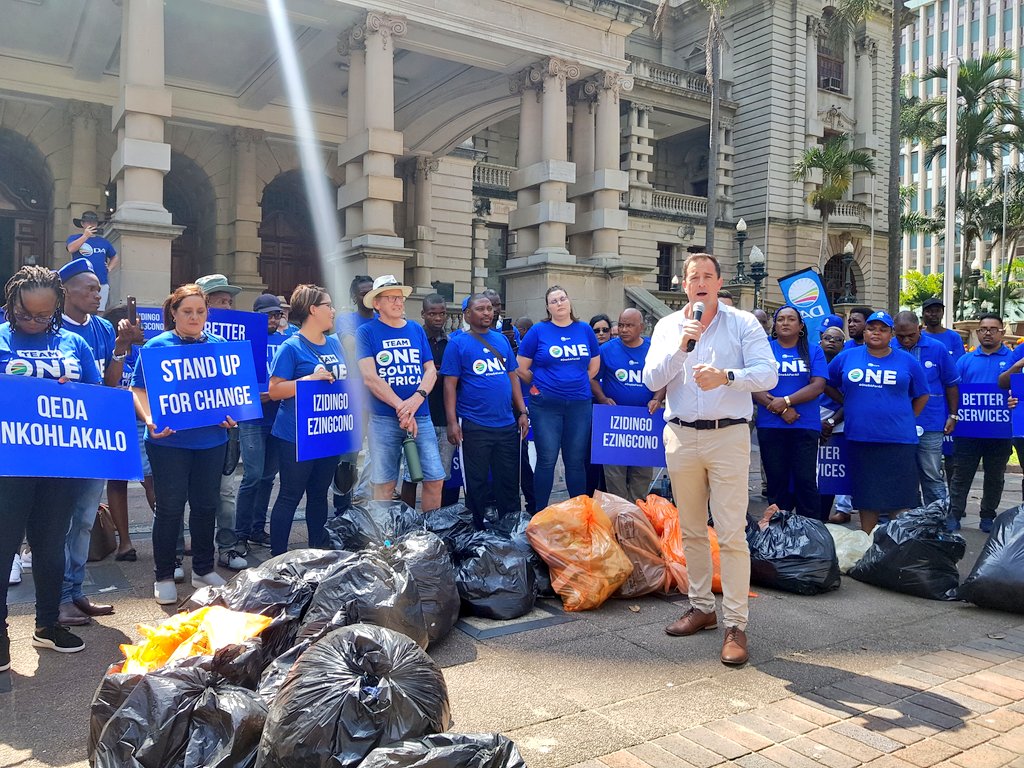 Today we’re here outside City Hall in central Durban to stand on behalf of the residents of this city and demand that the delivery of basic services is restored, and that refuse is collected timeously from every community. It should never be the case that honest and dutiful ratepayers of any city are denied such. However, due to rampant corruption and political interference within the Durban Solid Waste Department (DSW), the city’s streets are filled with refuse and litter, as collection has all but ground to a halt.

Make no mistake, corruption is not a victimless crime as the former President once suggested. The victims of corruption are ordinary residents of this city who pay their rates and taxes each and every month with a legitimate expectation of basic service delivery such as refuse collection. However, the same residents are let down by this government.

It hasn’t always been this way. The city had introduced an innovative waste separation system that enabled kerbside collection of recyclable waste. Households had to separate their waste into different colour bags, to minimise waste to landfill. These were: black bags for landfill, orange bags for recycling, and blue bags for garden refuses. The bags were provided by the DSW at a fee of R66.70, excluding VAT, which is added to their municipal account.

However, by 2016 this process started malfunctioning. Bags stopped getting delivered or were delivered on an ad hoc basis. The collection of the full bags also became inconsistent, with some residents waiting up to two weeks for their refuse to be collected. In February 2018, it was revealed that the tender process for the awarding of the contract to supply bags to the city was fraught with irregularities and a company which lacked experience and technical knowledge had ended up with the contract. This was part of the complete capture of the city’s administration by the ANC, led then by former mayor Zandile Gumede.

Today, eThekwini’s waste management is in shambles, and this is in large part due to political interference by ANC cadres. Zandile Gumede herself appears to be implicated in this breakdown, as are 60 other councillors. This as Gumede appointed an individual to allocate contracts to specific people on her instruction, and in the process flouted due process and tender regulations.

Sadly, this is a story South Africans know far too well: The ANC in government using the people’s money to further their own narrow interests, thereby negatively affecting the lives of all residents. That’s because corruption doesn’t discriminate – it’s an equal opportunity offender. We all suffer under corrupt governments.

Moreover, despite Zandile Gumede being arrested on corruption charges, she still receives a councillor’s salary each and every month. eThekwini ratepayers are funding the lifestyle of the corrupt Gumede and the ANC endorse this.

But there is hope! The DA is fighting tooth and nail to root out corruption and build a capable state that is competent to deliver services to all South Africans. Since the revelations of ANC corruption in eThekwini’s Solid Waste Department, the DA has laid criminal charges against many of those implicated in the alleged corruption, as well as securing refunds for the payments for bags which were never delivered to some residents.

Corruption in this city doesn’t start and end with the Solid Waste Department. Just yesterday the DA rejected the allocation of an additional funding of R166 million to the city’s Extended Public Works Programme (EPWP). This programme was moved into the mayor’s office in order to abuse the allocation of jobs for political gain. The DA has therefore written to both provincial and national COGTA departments, requesting an immediate investigation into the city’s EPWP.

Corruption is the antithesis of fairness. It ensures those who are connected get to eat, while millions of South Africans are left out and left behind. Corruption stymies the delivery of basic services, which form the bedrock of a functional society. Without water, electricity, roads, refuse removal, and basic infrastructure, our communities, towns, cities, and ultimately our country fails to function.

Now is the time for South Africans from all walks of life to coalesce around a new majority based on the shared objectives of constitutionalism, non-racialism, building a capable state, and zero tolerance for corruption. That is the path to prosperity for our nation, and the path the DA is forging ahead on.