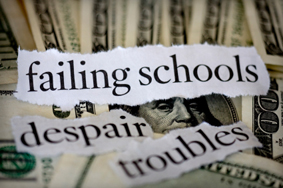 This is significant, since, by law, the relevant provincial departments need to present a turn-around plan for these schools to the Minister of Basic Education Angie Motshegka within three months.

If schools are not included on the Department’s list of underperforming schools, they are not required to provide a turn-around plan.

An underperforming school is one that attains less than a 40% pass rate for 5 consecutive years. In 2019 only 6 schools were listed as underperforming in the National Senior Certificate (NSC) School Performance Report.

All these schools are in KwaZulu-Natal.
However, looking at all the schools on this list in 2018, six of them are still performing under 40% in 2019, which means they should be on the list.

These 6 schools are all in Limpopo. One of these schools, Mahlaba Secondary, has been underperforming for 11 years!

The real list of underperforming schools can be found here.

The DA will now urgently write to the Minister to seek answers to the burning questions on this issue. Did the Department deliberately mislead SA, or did they simply give up on the six schools that were left off the list?

We will also be conducting an oversight at these schools to try and get to the bottom of the issue because it seems the DBE is simply not bothered with these schools.

Every child deserves a good education coupled with equal and fair opportunities.